A day to remember, we’ve spotted the spoon-billed sandpiper! – 5 June 2011

5 June 2011
It is still very windy and cold but less so than the last few days, after breakfast I got ready and picked up the Quad bike (ATV) from the storage container. I headed west of the village to check the spits that had thawed to see if any Spoon-billed Sandpipers were present, it was very exposed and none were to be found. I did see the female Bufflehead again with a group of Greater Scaup. Many of the ducks that were on the sea last week are appearing on any water that is now unfrozen, they were waiting out there for the thaw.

I headed back to meet up with Simon and Jochen as we had planned to systematically survey the moraine hills and gravel plain rivers. I ferried Simon to our start of point after negotiating the ice and snow and went back for Jochen and dropped him at his start point. By the time I had reached mine and parked up the quad I was being summoned…Jochen had seen a spoon-billed sandpiper on the edge of one of the pools. By the time we reached him it had gone.  Simon may have it…no…it turns out to be a red-necked stint…very nice little wader. Back to our routes and twenty minutes go by…again Jochen calls out…another one, it flew and landed 200m away in long grass. We slowly walked towards it, eventually finding the small wader crouching in the wind…this was going to be a special moment…it was another red-necked stint!

By this point I was giving Jochen the look every birder knows…the old ‘come on mate are you getting this right’…I did not say anything, my glance made him lift his camera and he showed me a record shot of the wader with an unmistakeable shovel tipped beak. He said it called and this guy is seriously good on calls, he is well known in Germany’s birding scene for it. Jochen was getting all the luck or reward. He called out again later and made flapping signs, again no SBS, he saw an osprey heading east. After two hours of intense searching, we had logged 12 red-necked phalarope, a pair of long-tailed skuas (these buzzed us just feet above our head and the red-necked stint did not react, which surprised me but the camouflage works) and wildfowl. We sat behind the quad for shelter from the cold wind and ate lunch and drank water. We had a chat and decided we needed to get a move on to check four territories in the moraine hills before it got too late.

We set off and reached the first site, nothing, very windy so moved off to a second site. Here we spread out and found a slope which was a bit more sheltered. We all led down and listened carefully. I slid behind my rucksack to help to hear more clearly whilst being buffeted. At least three lapland buntings were singing, a skylark too…a wader song could be heard…I looked left, Simon had jumped to his feet, I looked right and Jochen was cupping his hears already, about 10 seconds went by when Jochen I and I saw it high in the sky…I talked Simon onto it…the bird was fluttering and hovering high above us..in and out of blue sky and silver and grey cloud…it was a singing, displaying male spoon-billed sandpiper, you could see the flaps on the side of the bill!
We watched and listened as it performed for about ten minutes, it dropped down into the boggy, grassy slope and out of view. We gathered our stuff and crept up the hill being careful to get high above it to look down and keep us hidden against the hillside. There it was, a male spoon-billed sandpiper sat on a small mound surveying the area. It stayed for a few minutes but then flew up the slope and over the top. We were all so pleased, I cast an eye over the ground and saw another, a female, she was watching us and realised that I had spotted her and took flight dropping a short distance away. I led the guys to the area where I saw her go down and quietly indicated where with hand gestures. Jochen spotted her, I picked her up in my binoculars sat in the saddle of a lichen clad tussock and Simon got onto this beauty too. We crouched to the ground and stayed rooted to the spot.

This little bird stood and watched us watching it for fifteen minutes, if you looked away she disappeared and you had to search hard to re-find her. The plumage like every wader here is so well camouflaged in the habitat they nest in, you have to see them before you are too close because they always see you. All the waders are confiding if you are careful and take your time with them. The spoon-billed Sandpiper was now bored and trundled off through the spongy ground disappearing again.

We retraced our steps and took GPS co-ordinates of the area and gave a wide berth to this pair. I have little to say on how I felt, for a conservationist and birder it was simply an amazing experience. Simon came over shook my hand, barged shoulders, grabbed my jacket with both hands and started shaking me…he said in a loud, determined voice…’you and Nige cannot let these go extinct, you have to save them’… I swallowed hard and replied ‘we will do our best but this is not going to be easy’. We have a highly qualified team here, lots of experience of waders in the field and all understand the best techniques and procedures around the birds, we talk it over every time we meet. We still need a big slice of luck, there are so many predators and potentially bad weather on the cards, it is only going to get tenser………

We carried on checking another site, no birds there so pressed on for a fifth site. This one was on a beach on the west shore of Lake Pekul’ neyskoye, we arrived at the beach and sat for a rest. The ice had melted around the edges here also and held duck species. I wandered off to look over a gravel bank finding a grey tailed tattler feeding in a creek. A shout and waving followed by my two companions crouching behaviour said to me that they were on to something good.

I caught up and heard the song of spoon-billed sandpiper… they had located another pair, this male was very vocal and very keen. He was singing from the ground, a drilling, buzzing sound, every now and then changing the tone deeper, leaning over with tail raised, throat and neck feathers raised, wings raised, flapping, twisting and cajoling the female. She fed on the shore, Simon thinks they attempted to copulate but he may not have been successful. Perhaps he didn’t because he kept on singing wholeheartedly, there is time, she needs to feed well,  it is a long flight from the wintering grounds and she will need every bit of energy to lay eggs and survive. 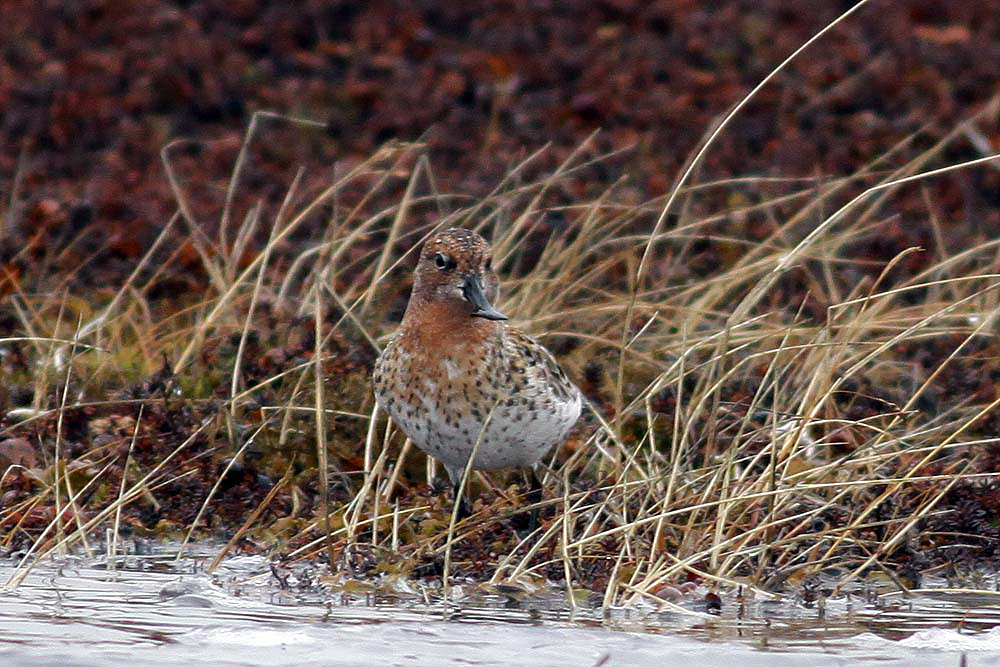 The whole performance lasted 15 minutes until the female led the male to a nearby slope where he continued singing. As we walked away we could still hear it half a mile away, the wind carried the sound to us. On the way back a pair of pacific golden plover was seen along with three mountain hares, one of the latter now turning grey. A long trudge back to the quad bike followed, on arrival the dry ground in a hollow where I parked it was now filling with melt water. We headed back in, straight to dinner, shared the information and began eating, pasta and beetroot never tasted so good the others tore into chicken legs. The rest of the night was editing images, emailing them and finished up with a unified decision to listen to Pink Floyd’s-Dark Side of the Moon album. Off to bed at 0200 with a particularly happy Simon, his lifetime ambition achieved- that is to see SBS displaying.

Nige spent the day exploring tundra and gravel spits well to the west of us with Gerrit, he rode on the back of the quad and they searched miles of habitat seeing red-necked stints, red-necked phalaropes and a few other birds but no spoon-billed sandpipers.