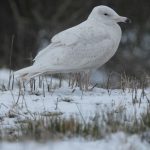 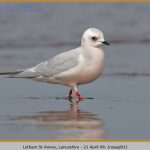 10 June 2011
I went to breakfast without Nige and Simon, we had a lot of planning and set up a meeting at our place to discuss immediate issues. Nicolai thinks the birds in the study area are 4-5 days away from laying eggs, we all agree that it is best that we stand down until then to allow them to choose exact spots to lay their eggs.  Pavel and Liza met us and we discussed some of the forthcoming issues, removing eggs from the hills and crossing the plain with them was a main point.

On this subject Nige, Simon and I have discussed it at length and we have agreed on a strategy. This was put into place later in the morning when Nige and I mocked up a scenario and carried out the procedure. I drove him out on the quad with a pre-warmed incubator on his lap, we met Pavel at the foot of the hills, loaded up dummy eggs and began the experiment of ‘best practice egg extraction’.

Nige climbed onto the bike, I passed him the incubator, he sat on the rear just in front of the back wheels, we plugged the incubator into to the 12v socket, temperature OK, I set off using the throttle carefully not making any jerky movements, we had to cross two miles of gravel and pools back to base. The firmer ground allowed fluid movement, reaching softer areas you need to throttle into to keep momentum and ease of after leaving, this prevents any loss of speed and a smooth ride. At the bumps you have to slow down and take them square edge on, it is best to stay in ruts you made before on the way out. Nige acted as a shock absorber for the incubator and could push it into my back if needed to avoid forward movement.

We travelled at between 6-15kms an hour, a long journey, not the most comfortable. I was focussed on every tiny detail on the ground ahead, Nige on riding out any movement, I found my mind wandering so kept saying eggs, eggs, (how I never thought of scrambled eggs I do not know, I have not had an egg for five weeks, truly professional). I told Nige to remind me of eggs, which he did, it worked we got all the way back without a problem.We were a bit stiff, cold and came up with minor improvements mostly for comfort for the real thing, a very useful exercise. As I had the quad I thought it best to join a search team of Gerrit and Jochen taking Simon with me. We drove out to the end of the spit stopping off at marshy peninsulas.

A party of four emperor geese were grazing, one pair clearly dominant over the other, these, white headed and barred bluish feathered birds are fat bellied and short-necked, they are found around the north Pacific rim. It was drizzling and cold, the mountains were hidden in mists in the distance, we pressed on walking for a while. I saw a very bright Spoon-billed Sandpiper feeding with other small waders, dunlin (race sakhalina), two bar-tailed godwit fed nearby, these also famous for long distance non-stop flights from breeding areas in the Arctic to Australisia and Africa. 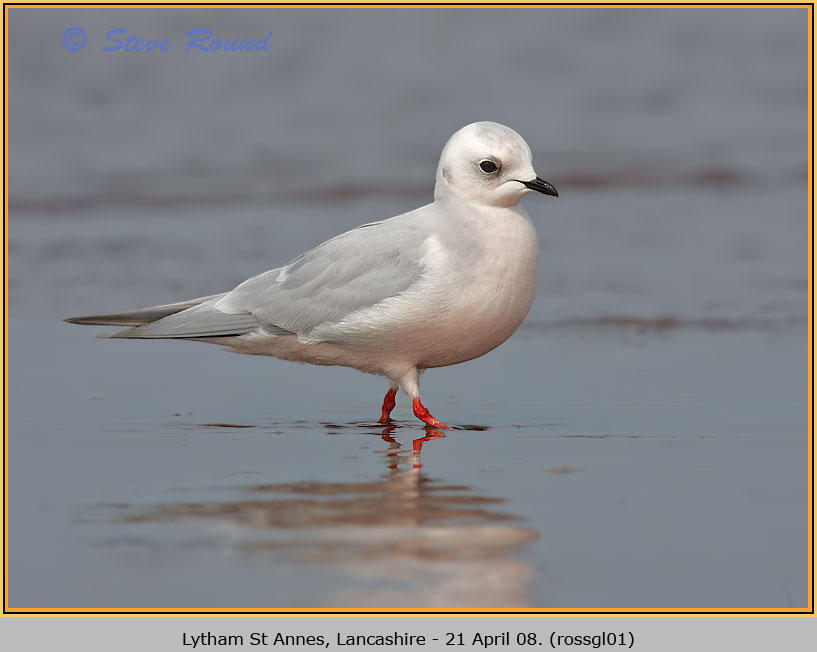 We got back on the quad to the end where a number of gulls were to be found. Gulls are not everyone’s favourite but they provide huge variety and a good challenge. Here we were presented with a new species for both of us, a glaucous winged gull, there were also four slaty-backed gulls, around 30 glaucous and 50 vega gulls. Most of these would attract a huge crowd of twitchers back home and make local paper headlines. Out on the ice I searched through the eider and other ducks. I spotted an adult ivory gull sat on an iceberg but it moved off before I could get close enough to photograph it, the light was poor anyway, whilst scanning for it I located a first summer ross’s gull, if you still do not get gulls, make the effort to look up the latter two species, stunners. 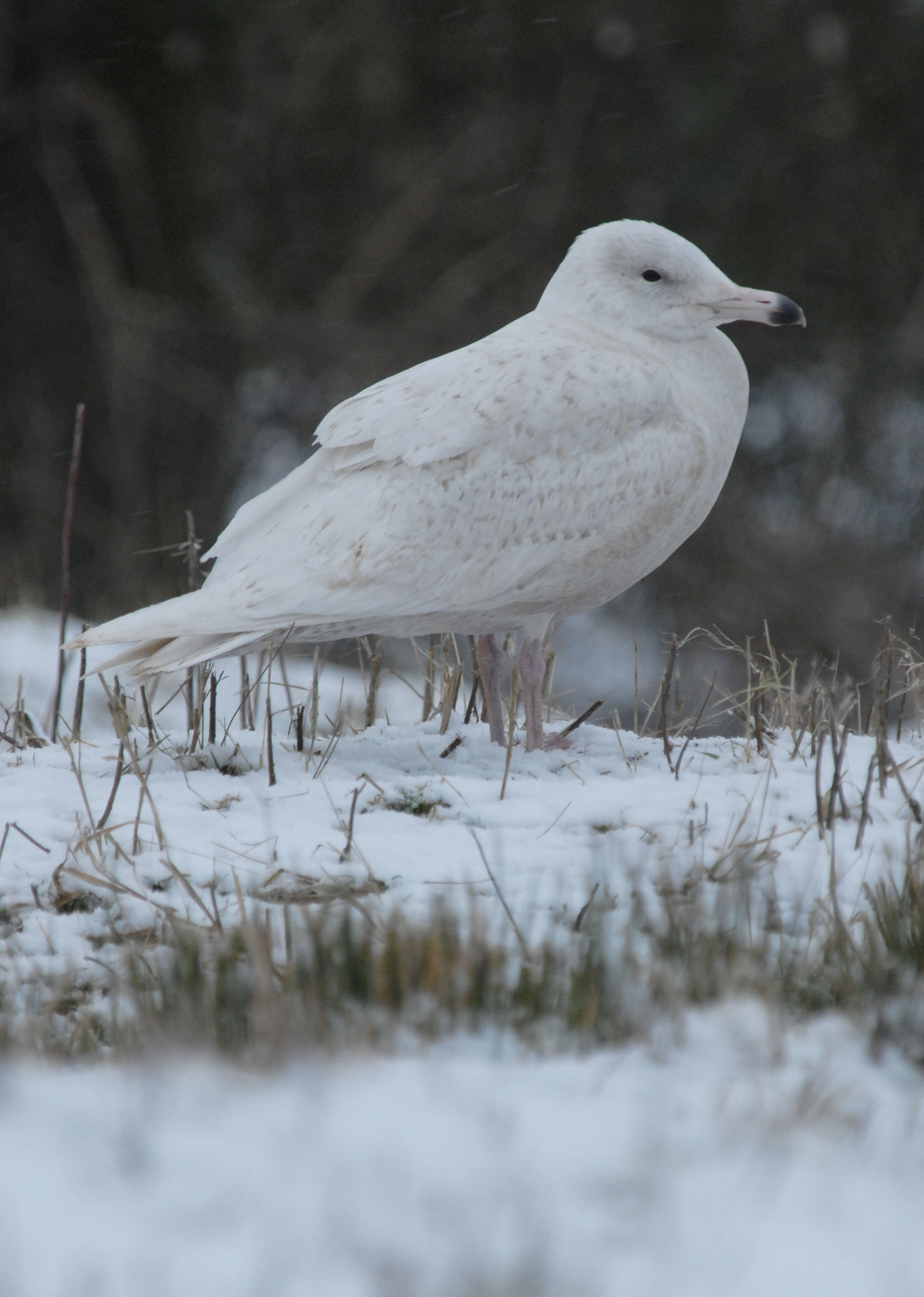 Despite calling to Simon tipping him off about the ivory gull he was immovable, watching another pair of SBS feeding in the marsh, it was grey and still raining, they have to get on with it whatever the weather.

Genuine concern has been aired as we had such strong winds for days on end at a very crucial time.  When SBS mate it involves a balancing act, a brief connection to ensure successful passing of sperm to the female, birds as light as SBS are simply blown off and can be unsuccessful, more clouds appeared but this time in my head….will this result in lots of infertile eggs?

A long, cold, wet ride 15km ride back to base and in a 2000hrs dinner, plus the daily bird log, Egor will not let us escape that and wants daily counts and records.  Nige told us of an encounter he had earlier, a very drunk Chukchi man appeared in the house whilst Nige was fiddling with incubators, no possibility of dialogue as neither understands each other’s language. Nige tried to encourage him out but he would not leave, he began grabbing at Nige and pulling him about, it was getting a bit tense, a stand-off and the guy was getting shirty. By a stroke of luck and out of routine, Egor arrived in the doorway, the youngest, probably the fittest and most well armed member or the team translated and helped to get the guy out. Apparently the chap wanted to wrestle Nige for some reason. Our fourth experience of drunk people letting themselves into our room or house. We got back home for 2200hrs, email checking, internet crashing, tired and ready for bed and locked the door behind us.

Highlight-Gull fest at the point