29 May 2011
Spent all day clearing out three rooms in the house, dirty, grimy, dusty work and we were all itching. Finished at 1700 and after dinner went for a walk at 2000hrs, I watched the sea to witness the migration for an hour, big parties of Pomarine Skuas and Black Scoters were passing by with many other species involved, perhaps 1200 birds passed by.

I was the source of entertainment for four local children who were all girls, Oksana, Snezhana, Kate and Lara. They plucked up the courage to see what I was doing and I let them look through the scope and binoculars, it became impossible to watch birds with them jumping up and down in front of the scope and looking through the wrong end! I did spot a male Brambling, the second record for the area and showed it to them and taught the English name. After a while I gave up as it was all too much fun and walked up with them jumping in my footprints in the snow behind.

I sneaked back after they went home and watched for a bit longer, Andrey and Elena appeared and after talking with him said he had a route to the sea and would show me tomorrow. The long distance views across the river of Grey Whales and migrating Short-eared Owls etc were very much a pull. A pair of migrating Mallard seemed out of place. 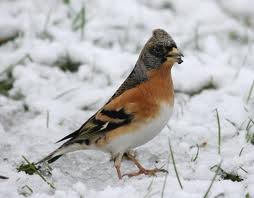