Oh dear….late start, missed breakfast, I was trying to email WWT when Liza knocked, she had brought porridge for the larry lightweights who had not got up for breakfast, the Pacific air and tequila had taken its toll. Apart from the reaction to celebratory spirits on this particular morning we generally have all been finding it very hard getting up in the morning, not a problem at home at all but here we struggle. Jochen and Gerrit feel the same. Perhaps the late nights to bed are to blame maybe the fact night is only a few hours of dimmer light. We have no curtains so I have tried tying a t-shirt around my eyes to help. We need the window open for some air the dogs and drunks come alive at night and are vocal. Sleeping on the camp mats on the floor with home-made pillows from jackets and fleeces may play a part, diet, constantly living the situation with no leave from it, who knows but it is a fact we all struggle to wake and could all go back to sleep for hours!

I headed to the river mouth to check on the situation, bumped into Andrei who explained that they will break the shingle ridge of the river mouth in a few days, a large bulldozing operation or by spade? This will drop water levels over the gravel plain. The reason is to allow fish to enter the system to breed and secure a food source for the rest of the year sometimes the sea does the job naturally. 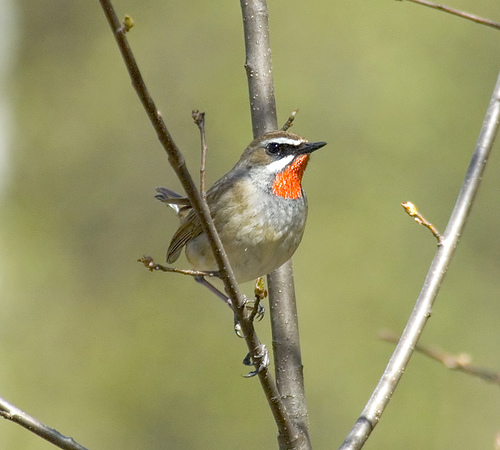 The river ice had nearly all melted, a few ‘bergs’ drifted past with Harlequin Duck and Pacific Eider pairs sleeping on top. I felt I needed a day on my own so walked out across the gravel plain to the corral stream and followed it to the low willows, a male Bluethroat sang wholeheartedly having arrived on territory. It is like a jewelled blue version of a Robin. I also saw a skulking Siberian Rubythroat that flew off over the hill. 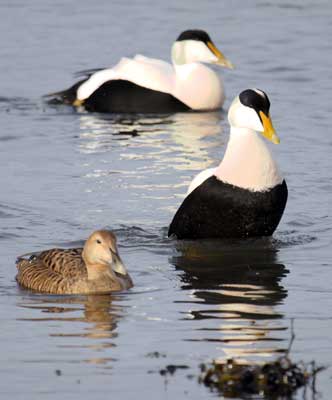 Nige and Simon had caught me up and saw the ‘throat’. They continued in land and I followed on a different route flanking them, they sat and waited in one spot to listen I zig zagged deeper into the hills. I had two singing male SBS on a plateau and I heard another in the distance out west.

Heading back toward the stream I settled down on a slope above a territory, silence and no movement, it was dead still, no wind, my stomach rumbled and a male Spoon-billed Sandpiper responded singing straight away, surely he never heard that!

I checked the GPS and saw I was going to miss dinner, I lost track of time. I sat back and watched him for an hour and half. This bird is fairly whitish in plumage and he has chosen a great spot for a territory, a small gully protected from some winds here and a sun trap. He was stood on top of a tussock with his bill tucked into his back, eyes open. Lapland buntings, skylarks and Arctic ground squirrels called and he never reacted. A pair of white-fronted geese flew low over calling loudly this made him wake briefly.

Eventually at 1945 he took flight, displayed singing high above making the buzzing song which is so distinctive and carries a long way, essential in this habitat. He flew off over the hills towards the rivers and was gone. Perhaps the female was feeding there too. Nige and Simon had been watching a pair for a long time at their site it was the perfect day for listening. I walked back ready for a long hike and Pavel and Egor arrived on the quad, they too were late and a quick weight check ( I am much lighter than when I arrived) and I was on too, a lift back, heaven.

The helicopter arrived today bringing Nicolai and some more supplies. He has been studying SBS since 2003 and will soon get to work searching out territories in out of the way places and with great hope locating lots of nests.