29 June 2011
I woke a few times, every hour and finally checked my clock to see it was now 0440. I had beaten my alarm clock which was set for 0500. I woke Nige and Simon, we had a coffee and got set up for the day. The weather was OK, cool and overcast but dry and not too windy. As we had many kilometres to cover today we had the quad bike already outside, I rode across to collect Liza at 0530. We were collecting the eggs from the nest Simon and I discovered, sometimes referred to as the ‘English clutch’ but numbered for our purposes. First I dropped Liza, then Simon and then collected Nige and the portable incubator. We all gathered to walk in to where the nest was located…crossed a stream and saw one of the birds lift off the nest and fly away. I used the small landmarks to find my path, no GPS required. A few more steps and there it was, a clutch of eggs. 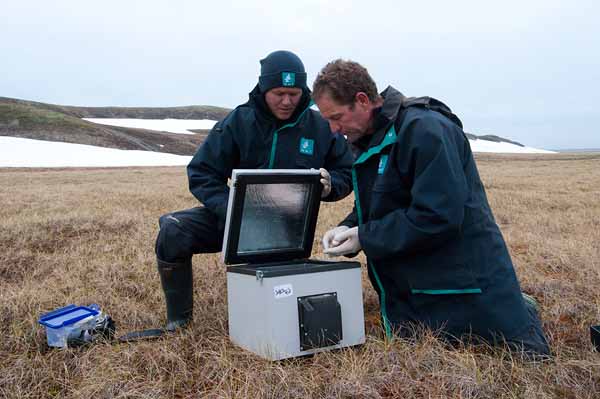 Nige carefully placed them in the portable incubator and we all walked back to the quad. We took another slow motion ride back to the house, carefully climbed off the quad, dusted down, removed the outdoor gear, washed and sterilised hands, changed into incubator room only footwear and went in. What followed was the procedure of candling (looking into the eggs with a light which has a cool bulb) to see if they showed any signs of life, measuring the length and breadth and weighing them. As we have said before, in the wild it would be normal for some eggs in the nest to turn out to be infertile, so we expect there to be some amongst those we have collected. Sadly, not every fertile eggs does goes on to hatch into a healthy live chick either. It is a fragile and heart-stopping process, but we remain positive and keep our fingers crossed.  We were all done by 0815 and the eggs were now in the main incubator. 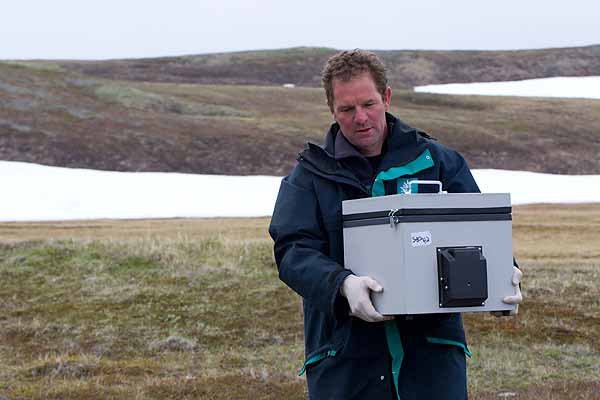 1000-1500
I dropped Nige at the quay. Nikolay was waiting with the inflatable boat and outboard motor. They headed upriver on the 15km journey to the end of the spit which is where they were to meet Liza and me. We took the quad, me riding it and Liza on the back with the portable incubator on her lap. A long journey over bumpy ground was completed, we average around 20kms and hour but the guys with the boat had got there way before us. The journey back would take a lot longer as we would be doing 5-10kms and hour to eliminate any bumps.

Half of Liza’s face was covered in a layer of dust which provided some amusement. Nikolay and Nige crossed the water leaving us with the quad running to keep the incubator warm. I wandered off to look at what birds were about. We had seen two pairs of Emperor Geese on the way up, a party of five fed on an island. A flock of 43 Red-breasted Merganser held a single male Goosander among them. He was displaying to the female mergansers and made the males of that species look very small.

After forty minutes the boat could be seen returning and we prepared for their arrival. Nige came ashore with the eggs. We placed them in the box and prepared for the long journey back. Liza joined Nikolay to be ferried back. Nige and I rode slowly back seeing the Emperor Geese with nests again. The village seemed to be miles away and never getting any closer. We passed Egor, Pavel and Jochen who were out searching for Red Knot on the gravel plain tundra. Nige was now the one with half his face covered in dust 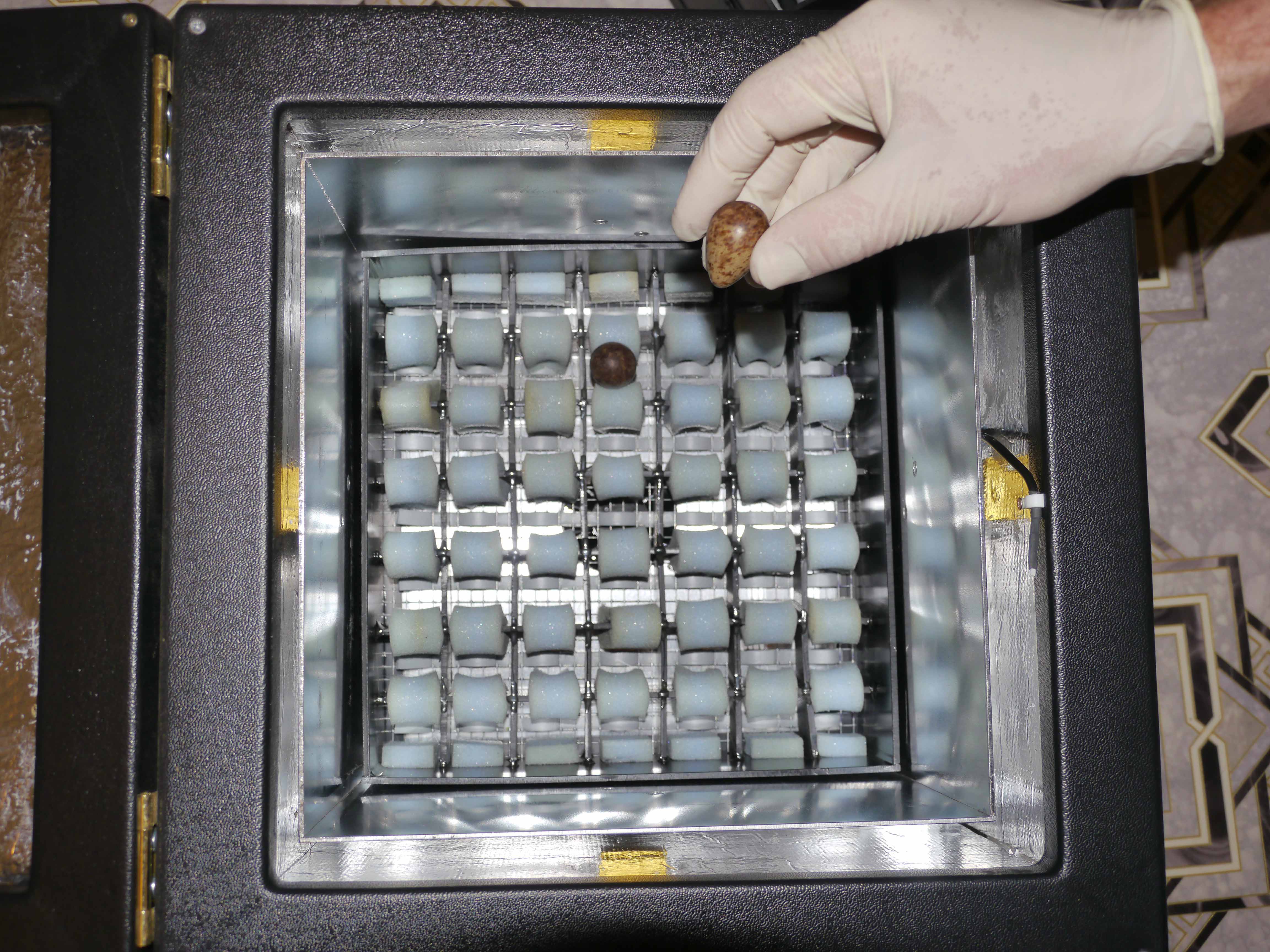 Placing the eggs into the incubator, Photo by Martin McGill

We stood down for a bit to eat and rest before meeting up at 1600hrs to begin the next phase of the day. Nige took the quad and dropped Liza and returned, whist he prepared I dropped Pavel who was going to lead us to the nest deep in the hills. I returned for Nige, incubator on lap and met up with them at the foot of the hills ready to follow a stream inland. We walked to the site. Pavel saw a bird leave and he re-located the nest. We followed him in and Nige used a converted Tupperware box to nestle the eggs into ready cut foam, this was used for the boat crossing also. We said out goodbyes and parted, Nige and I heading for the quad, Pavel and Liza directly back to the settlement.

It was yet another long, slow journey back. I dropped Nige at what was formerly a river but now more of a stream and was going to repeat my outward journey. This took me a long way around over bumpy ground hence dropping Nige in the first place to pick him up again. This time I had a good look at the stream, checked depths and entry exit points and felt I could get across with a non-nonsense but safe approach. It worked well and we were soon back on the bike and moving. This saved the incubator cooling down at all as it was swiftly plugged in to 12v socket. It does a great job of keeping the heat in. Another repeat of our procedures and we were finished by 2100hrs. Time for dinner, some discussion and for Nige some extra work data inputting to make calculations based on our measurements, weights and knowledge of the nests. 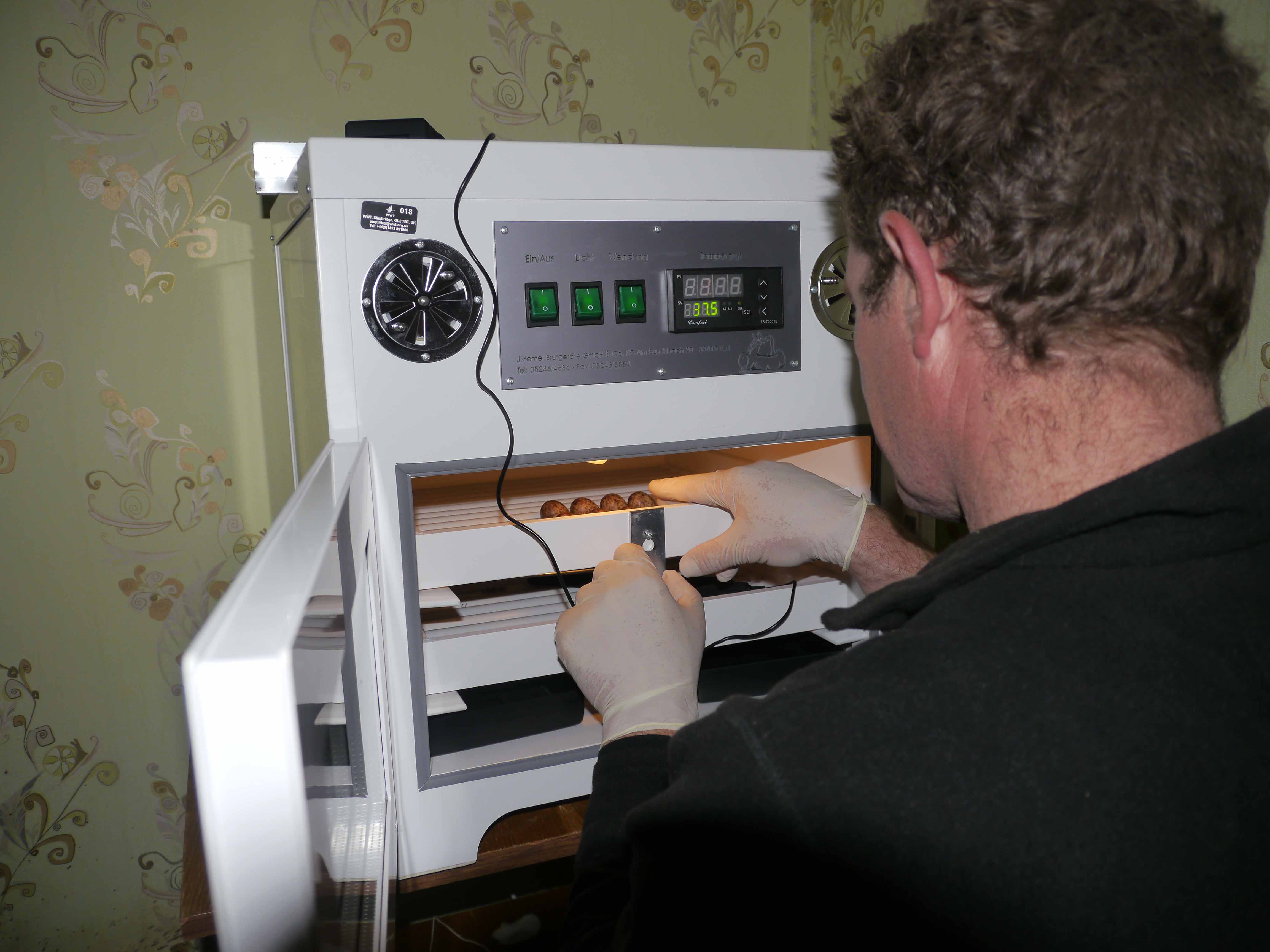