After around 90 hours of travel from Wellington, New Zealand I finally made it to Anadyr.  The trip involved flights from Wellington to Sydney, to Bangkok, to London, to Moscow, to Yakutsk and finally Anadyr. I was relieved by the thought of no more flights and waiting around in airports until the SBS chicks are ready to go!

Roland and I met at Heathrow to divide up some of the 60 odd Kilograms of baggage he had, copious supplies of heat bulbs, bird food pellets and various other bird husbandry related items.  We then travelled to Moscow and on to Anadyr together, via a change of airport in Moscow and some interesting questions from airport staff regarding the mysterious bags of bird food!

We arrived in Anadyr on a rainy afternoon, met Liza Tambovtseva at the airport and took a taxi to where we were to stay for the first couple of days.  After a quick and very much appreciated shower, we then took another taxi to the apartment where Nige, Martin and 16 spoon-billed sandpiper chicks were waiting for us.  The apartment is in a village of Anadyr called Pekhota, and is around a 15min taxi journey from the village where the airport is situated.

The chicks are absolutely stunning, and I was amazed and astounded by the fantastic job Nige and Martin had done to produce such healthy and settled chicks.  Especially considering the constraints of the small apartment and the mad rush they had getting on to the boat at Meinopylgino, hatching and raising on the boat itself, then getting off the boat, to the apartment and up 5 flights of stairs with all the chicks and gear intact!

We arrived to 16 healthy chicks, and 2 eggs left to hatch.  Unfortunately despite their best efforts one chick had passed away the previous day.  Roland and I reluctantly dragged ourselves away to get some rest and return the next day. 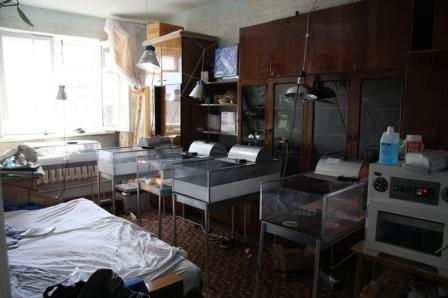