I joined Nige on the boat, saying goodbye to everyone who had been a part of the expedition and our friends from the school.  I was waved off from the beach. Simon was our housemate for all these weeks but was staying. I had said bye to all the team involved in the project. The waves were bouncy as we passed the feeding Grey Whales. Reaching the ship I boarded and made my way to the deck where Nige had the birds waiting. It was now time to get into another gear, to tune into another mindset as chicks had hatched, were due to hatch and we had still so much more to do. Nige looked awful but as ever was still smiling. We organised ourselves and I was sent to have a fine dinner with Evgeny, Elena, Jochen, Christoph and Liza. I did feel rather uncomfortable as I was still in the mosquito catching clothes of the last few days and was grubby and dishevelled and extremely tired. My dining partners were very kind and allowed for what must have been a rough sight across the table. All of the crew and passengers were understanding of the situation and were very helpful to us.

I did not hang about for pudding as I was mindful of Nige who was with the birds, I was brought some though and Nige had his turn. I t was hard eating so much food, a real struggle. We spent the whole evening and through the night getting chicks to feed, setting up new brooders, cleaning and we both had a three hour break, time for a lie down and a couple of hours sleep. Nige took the first watch, he woke me at 0300 and I took over. At around 0600 we had a lot of activity, I had planned to leave him but there was too much going on and we needed two pairs of hands. I tried to wake him, shook him, rocked him and then he jumped up and curled into a ball shouting in terror at me. We were both scared! This reaction caused a lot of laughs later.

The whole day was spent dealing with chicks and eggs, keeping it all going. We reached a stage where we things had quietened down and we were on top. We both got a rest in the afternoon when Jochen and Liza looked after the young ones for us. They could wake us if they had any problems, it was just a watch and feed situation. No eggs were imminently hatching. We woke at 3.30pm and got ready to carry on. We had a short session with some of the passengers to ask questions and have a look at the setup and settled in for another overnight shift. Nige slept with the birds. Nige regularly reminded me that we had SBS chicks in front of us, we had to pinch ourselves as it was a like a dream.

The whole time we were aboard we were made to feel at home. All of the crew were so friendly to us and visited regularly. They were a very professional group of people, everything ran so smoothly. I cannot praise them enough. We had one of the world’s rarest birds onboard, Nige and I were ‘up to our eyes in it’ and it seemed surreal that millions of Brunnich’s Guillemots, Fulmars and Kittiwakes were passing by continuously. We had anchored near a Walrus haulout, thousands of these giant animals were resting on the beach below stupendous cliffs, Grey Whales fed in the bay and all could be seen from our porthole window with SBS chicks running around next to us. It was a good time to catch mosquitoes.

I did see Tufted and Horned Puffins, Crested Auklets and the lovely ‘Blue’ Fulmars. After the passengers all got to see Walrus up close from the Zodiacs the ship set sail, we saw many photos of the experience, it would have been a magic thing to do but we had our own magic to weave with the sandpipers. 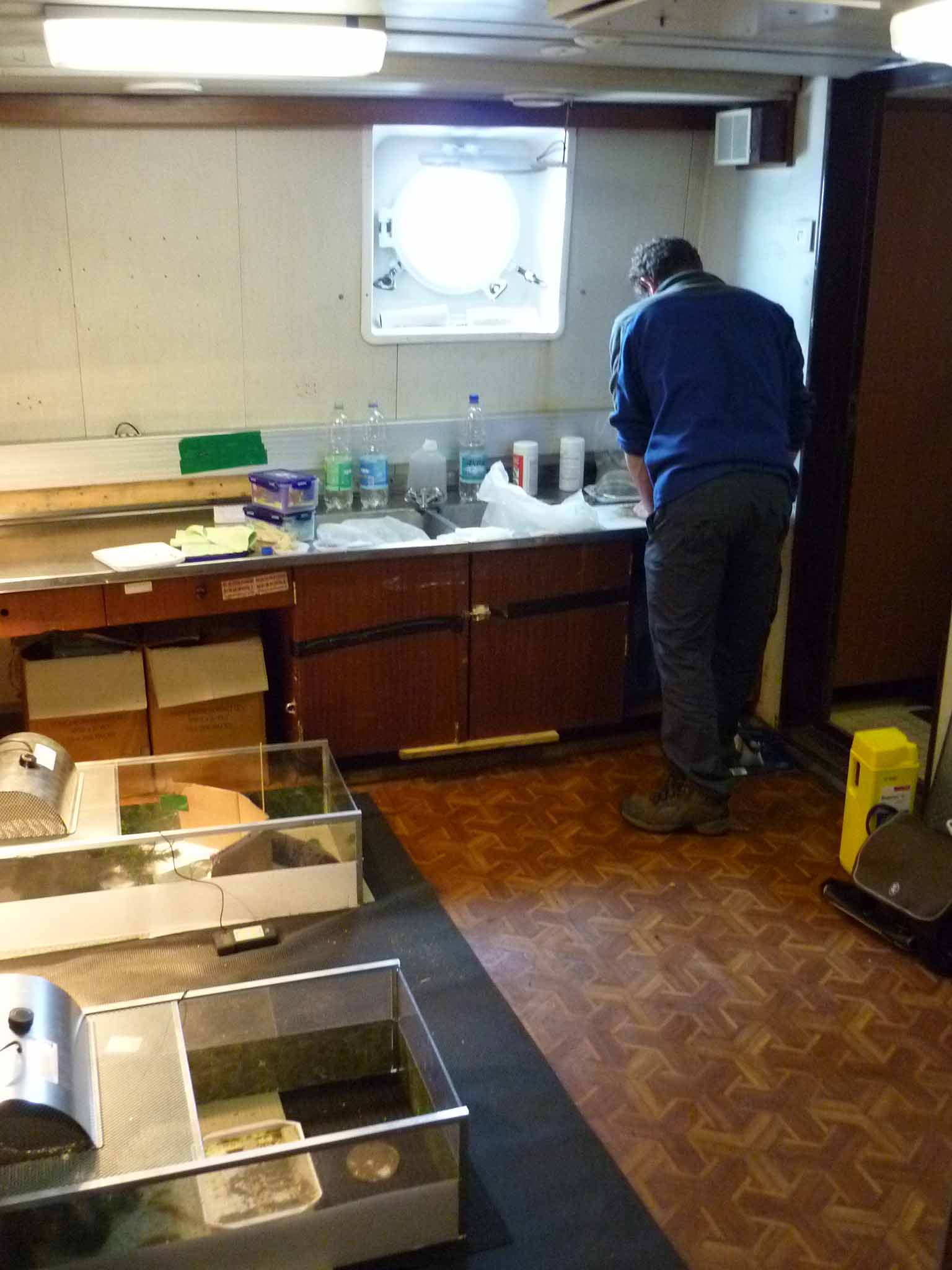