The morning is bright with a strong and cold south-west migration-friendly wind. The first of the Terns have arrived, Arctic Terns flying along the coast on their elaborate wing beats. Christoph took the WWT group out on to the tundra in search of a good site to build the rearing aviaries.

Christoph predicts we will see Spoon-billed Sandpiper today, though it is one day before the earliest previous sighting. At Third River, scopes up and focused on waders, we search through Dunlin, Grey Plover, Red-necked Stint and Red-necked Phalarope, find a couple of Temminck’s Stint and a Terek Sandpiper. We are getting exciting now and then a bird obscured, ‘move, come on move’, is it? No, but it’s a Western Sandpiper instead.

Then Christoph called it. There moving into the foreground feeding furiously, vying hard for space along the water’s edge was a busy little individual with russet colours spreading up over its head and down its chest— and as it turned head-on, the unmistakable spoon-shaped bill. The first for the season and the earliest-ever record on the breeding grounds of a Spoon-billed Sandpiper.

We went on to find a total of five individuals for the day. Other notable sightings at Third River today included fourteen Long-billed Dowitcher, two Western Sandpiper and eight Grey Plover.

Phil and Baz took the ATV up in to the moraine hills over to the Upper Vaamochka lake, into an area of willow scrub where they had very good views of singing Siberian Rubythroats, Dusky Thrush, Bluethroats, Little Buntings and Pechora Pipit.

Pavel and Egor successfully managed to catch three female Red Knots one of which had been ringed in Australia. They now know where this bird spends the winter after leaving its breeding grounds. 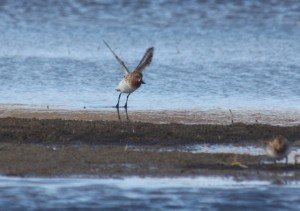 About the Author
Richard started his career at WWT Slimbridge before moving north to WWT Caerlaverock. Richard Smith spent two years on the avicultural staff at Slimbridge and three years as a Reserve Warden at Caerlaverock, contributing to research on whooper swans and barnacle geese. Along with other Richard and Liz Mackley, he has been on an expedition to Iceland to research whooper swans. Most recently he has been leading a team of 12 jobseekers in conservation work for Wiltshire Wildlife Trust. He spends much of his time outdoors, birding, kayaking and surfing.
Social Share