It’s spring on the tundra, and as the snow melts it reveals the autumn crowberry crop, still available as food for the first migrant birds. The Moss Campion is opening in pink domes, willow catkins are furring up and the dwarf rhododendron budding.

Notable sightings of the day from Baz Scampion included a great selection of migrant waders, especially the first Grey Plover and Western Sandpiper, which are scarce birds here. Karin and I saw several Long-billed Dowitcher, as well as a Sandhill Crane’s nest containing two eggs already well on their way towards hatching day. The WWT Team managed a day out from facility preparations to see several Bean Geese and Red-necked Stints as well as some song-flighting Lapland Buntings.

In the moraine hills, a White-tailed Eagle flew through just after Karin and I had taken diversionary action around a big sleeping bear. The first bear we came across today ran off quite quickly, but this second one broke all the rules by refusing to budge. With a great furry chin on a great chocolate paw, the bear just watched us go by. Because of the large number of rusting barrels on the tundra it took a while for me to convince Karin that barrels don’t have ears!

Two days in and already a few scary moments…I will admit that it was nice having company on the tundra as it halves the likelihood of my being eaten (tee-hee). 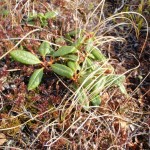 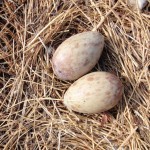 About the Author
Phil first visited Chukotka with Dr Evgeny Syroechovskiy as it became obvious that the spoon-billed sandpiper was heading towards extinction. Since then he has helped Evgeny and Christoph survey other parts of Eastern Russia as well as studying spoon-billed sandpipers in China. Phil works full-time as bird tour leader for Bird Holidays in Leeds and undertakes these expeditions as part of the Spoon-billed Sandpiper Task Force. He funds himself and says it has been difficult to visit as often as he would like. He has made various discoveries along the way, including many vagrant birds in Siberia. If asked, he would guess that his best find was a western meadowlark near Provedenya in 2004.
Social Share