Light snow in the morning turned to clear blue skies in the afternoon. Christoph, Phil and Tom took the last chance to cross the thinning river ice to the alongshore spit, to sip hot tea by a spit-top fire while watching birds migrate north along the coast and whales feed. It was an adventurous day for Christoph, Phil and Tom, as besides risking an icy dunking on the crossing, they ran into a brown bear on the way to the river, followed by a nose-dive into a snowed-in stream with the quad bike.

Meanwhile the more serious members of the team, Pavel and Egor, went to check for Red Knots as part of an ongoing study of the 11 pairs and 3 unmated males in the local breeding population so far. Great excitement today when the team found five birds wearing data loggers, most likely the same five birds who were fixed with data loggers in the same spot last summer. Now Pavel and Egor are faced with the challenge of catching these wily birds to retrieve the data loggers which will reveal their trajectory since leaving Meinypil’gyno a year ago. 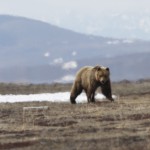 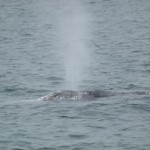 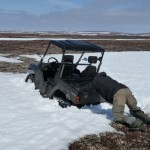 About the Author
Karin Eberhardt first saw the Spoon-billed Sandpiper on a tidal mudflat in Myanmar’s Gulf of Mottama. As a volunteer with the Bird and Nature Conservation Association (BANCA), the Myanmar BirdLife partner, she advises on approaches to alternative livelihoods for bird hunters, raising public awareness, and cooperative management of the Gulf of Mottama as it is designated a RAMSAR site. Based in Myanmar for over 12 years, she is a consultant to conservation and/or development projects. She brings to Meinypil’gyno’s students a response, from schoolchildren of Myanmar, to their conservation message of last year.
Social Share