Camping in the West

We cross the First River several times at different locations with a small rubber boat to get our luggage and three people across to the coastal spit. Egor waits for us at a spot across from the end of the west end of the spit with the quad bike that had been transported earlier with a special boat by Roman, the husband of Sveta. A strong south-westerly wind hampered our crossing. We hike another 5 km further west along the spit to reach our camp. Already on the way we find a male Spoon-billed Sandpiper feeding near good habitat and looking like it holds a territory.

We pass an old oil rig from the 1990s. Abandoned sheds and vehicles and rusty items are scattered widely around the spit and well into the tundra. Arriving at the camp we are soon surrounded by thick fog. The hoarse calls of young ravens from the rig tower and wires bashing on metal create an eerie atmosphere. A nice camp fire provides hot water for tea and fish soup is boiling. The wind is picking up without lifting the fog and our backs are getting cold. An early night is appreciated. Not everybody sleeps that well as Mr. Brown had passed quite close to our camp.

Long hikes into the moraine hills, along the western shore of Vaamotschka Lake and along the coastal spit the next day reveal an incredible three to four territories. Three pairs, one nesting for sure and two probable or with an incomplete clutch, and a singing male, are a comforting addition to the meagre present status at Meinypil’gyno. The moraine hills are vast and could easily host a few more pairs but bad weather prevents us from further surveys and we decide to head back. 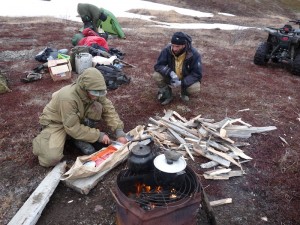