Expedition to the east

Expedition to the east

Our four-man survey team camped two nights at Ankavia, 12km east of Meinoypil’gyno, to survey an area another 6 km on to the south east.

We had to cross a narrow strait between Lake Peculnej and Yandatavey inlet, littered with icebergs that flowed off the lake, and when the tide turned, flowed right back in again. The four of us loaded into two inflatable canoes and hauled ourselves across the strait as quick as possible on the slack tide, which seemed to last only 10 minutes before the water started to rush back the other way. A pair of White-billed Divers seemed to revel in the tide while a number of seals held their station in the flow to watch us cross, just showing off! 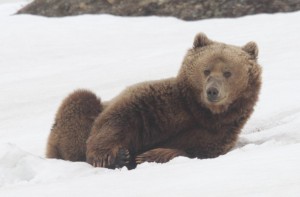 Once across, our 14km hike to the two historical breeding sites began. Egor, Tom, Phil and I fanned out and combed the shore and adjacent moraine hills, crossing sheets of ice, snow, streams, tussocks and loose gravel. Halfway to our objective, about to crest a rise, a rather anxious Egor broke the line and rushed up to us from the shoreline, stopping us in our tracks. There in the snow a great shaggy bear lay asleep on its back not more than 50 metres away. The bear awoke and looked in our direction, round ears twitching and heavy muzzle sniffing the air. Adrenaline raced through my veins, but before we knew it the bear was up and away, pounding hard for the hills. An incredible experience, shared with three friends, two cans of pepper spray and a shotgun.

There were few waders on our journey apart from a number of Dunlin stanchly defending their territories, Long-tailed Duck, Black Scoter and Scaup patiently waiting for the water bodies to melt fully. A number of White-fronted Geese and Sandhill Cranes were on nests. A few pairs of Emperor Geese shyly kept their distance, and one pair of Lesser Canada Geese (mega-rare) was spotted.

We got to the breeding territories but no Spoon-billed Sandpiper were to be seen, we hope that they just hadn’t arrived yet. We had come nearly full circle around the Yandatavey inlet and were now looking out to sea with the sound of the pounding waves filling the air as they slammed into the steep gravel coastline.

We lunched at an ancient settlement on the south coast, similar to a hill fort, that once belonged to the Kerek people that lived off the sea. Below us a dead walrus rolled tusks topsy-turvy in the surf, while the now-awake bear came to watch it turn, followed shortly by another.

We straight-lined our route home through the hills, and were rewarded by the sight of a female White-fronted Goose who bravely stood her ground to defend her eggs from a roving Arctic Fox. Four weary bodies paddled back across the strait to the camp after a 24km yomp over rough terrain. We finished an eventful day round the camp fire over a pan of buckwheat and tinned reindeer, a kettle of tea and many amusing stories to the sound of calling White-billed Divers and displaying Spoon-billed Sandpipers.