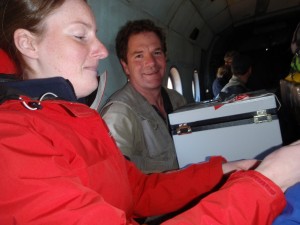 Liz hands over to Nigel before the flight

Today was miraculous: for the third time in the expedition, the helicopter flew as originally scheduled. This time, for the 1.5 hour flight from Meinypil’gyno to Anadyr, the helicopter carried the incubator, attached to a battery, and with a full complement of eggs.

The charge of the incubator itself was handed over with great relief by Liz B to Nigel J, who if all goes well, will bring them to Slimbridge to hatch. I noticed the same concentration on Nigel’s face, as he held the incubator in his arms and off his lap throughout the flight to minimize chopper vibrations, as Liz had shown in the buggy on collection runs to the nest.

Great thanks and kudos to Liz, and best of luck to Nigel, as like the Olympic torch being carried to London, the incubator is relayed to Slimbridge. The next leg, Anadyr to Moscow, is planned for Thursday 28 June.

Having reached the goal of egg collection for conservation breeding, many of the team left Meiny with the egg copter, i.e. Christoph, Thomas, Sayam, Liz B, Liz M, both Richards and me. We seem to have spent all our luck on heli flights, as onward tickets to Moscow are unexpectedly extremely scarce right now, and most of us face an extended stay in Anadyr. The silver lining is good birding prospects in the area, and beluga whales already sighted in the sea.

Back in Meiny, Nikolay, Roland, Juri, Pavel, Egor, Phil and Baz are kicking the headstart program into gear. The WWT group and other team members had worked very hard over the last several days, in bad weather, to put the release pen together. The evening before we left, the whole team turned out to pull a second net over the 20-meter pen, shore up the sides, and have a small celebration, Russian-style. The pen is nearly complete, so stay tuned for their news.

Signing off as Meiny blog coordinator, I thank you all for listening, it’s been a great pleasure! 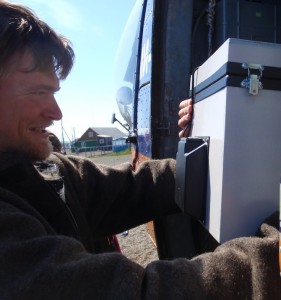 Egor lifts the eggs into the copter c Karin Eberhardt 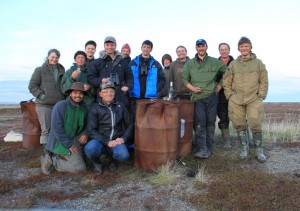