One day of spring for the Spoon-billed Sandpiper

After several straight days of fog, frost, flurries and snow, which dusted the hills yesterday morning, today was like the first day of spring. The skies turned blue, clear, sunny, and warm – that is, until the sea fog rolled in an hour ago. In the moraine hills, the junipery fragrance of crowberry rises from the tundra, rivulets run down from thawing snowfields, and ice on the ponds is beginning to tinkle and shrink.

The team has been surveying for SbS every day for the last week, noting especially birds that are displaying and seem to be pairing up.

From what the team has observed so far, we anticipate two pairs on the western spit and 4 to 5 presumed pairs in the moraine hills. However, these are the proverbial early birds, and more are likely to arrive, while some presumed pairs may separate. It has now been a week since the earliest birds began to display, and some are likely now mating and searching for nest sites. But the cold weather of the last few days has slowed the mating process, as the birds fed to stay warm and had little surplus energy. 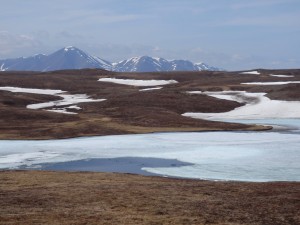