The Red Knot breeding population in Meinypil’gyno, only 10-12 pairs, is unique in that the birds breed on the coastal plain rather in the mountains and higher ground, as does the rest of the known population. It is likely the southernmost breeding site for this species in the world. This population thus deserves special study, and since the Red Knot breeds earlier than the Spoon-billed Sandpiper, is complementary in the season to study of the latter. The two species are similar in many respects: they have high nest site fidelity, are monogamous, and male and female share brooding responsibility.

Through our study we have confirmed that the Chukotkan Red Knot population migrates to Australia and New Zealand, unlike the larger-bodied Wrangel Island population that migrates to America. The question now is to determine which route the Red Knots take along the flyway. While many colour-marked Red Knots have been seen in concentrations in Bohai Bay on the way north, we are not sure how they head south.

To find out, in 2011 we placed geo-locators (data-loggers) on five males, all of which have returned this year. Now we hope to catch these birds to retrieve their data. However, only four of them have paired and are nesting now, so we will likely only be able to retrieve those four, as birds not brooding are very difficult to catch.

We are also learning about longevity of the birds. On June 1 this year, we captured a paired colour-marked female, which our Australian colleagues confirmed via email was ringed as a first-year in February 2007 near Melbourne. That means the bird is now six years old. In the last two seasons we also recorded a male ringed in New Zealand, that Christoph first encountered breeding in Meinypil’gyno in 2005, and is at least nine years old. 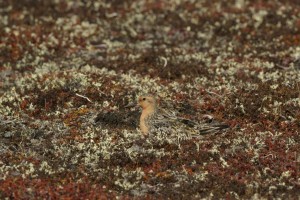