Sayam and Tom found one in the western delta with a female ready to lay, and Phil and I found one on a spit on the south shore of Piculnej Lake, where they have never been recorded.

Today the first clutch had its first ‘check up,’ as Liz B candled the four eggs to find progress satisfactory —all are developing.

Another clutch joined them on 17 June, to bring the total number of Spoon-billed Sandpiper eggs now in the incubator to eight.

Amidst the excitement of first nests and clutches, Roland and Yuri arrived to Meinypil’gyno on Friday the 15th—after only one night in Anadyr. We welcomed them by celebrating Roland’s birthday on Sunday with another of Sveta’s feasts.

Roland will stay into August to help with the head-start program, and finalised the aviary site selection today. The area has vegetation appropriate for releasing juveniles, including some dwarf willow for cover from predators. There is a water body nearby and enough space to park the vestikhot (the Russian tank) which will be used by the camping aviculturists.

Notable sightings in recent days were several Ivory and Sabine’s Gulls at the riverside, a couple of Gyrfalcons in the moraine hills, a juvenile Golden Eagle, and the first Arctic Warbler. Roland and Baz saw a few Beluga Whales. 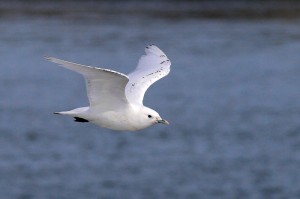 Leave a Reply to Ken Tucker (AKA Turnip) Cancel reply