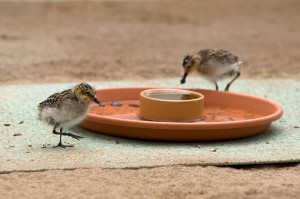 Yesterday I visited the chicks to help colour ring them so we can follow the progress of each bird as an individual.

I was staggered at their development- it was only a week since I saw them for the first time when the last brood was just hatching. Now they are all running around calling and chasing insects and only occasionally brooding under the heat lamps. The oldest brood now has access to an outside run and are almost fledged. I watched with amazement as they chased a spider that was climbing up a wall. One by one they ran up to the wall and tried to grab it just out of reach. They then lost interest until the spider dropped down on a thread quick as a flash it was gone. Their spoon shaped bills do not impair their ability to catch live food!

We needed to clip the tips of the wing feathers of the oldest ones so that they cannot injure themselves by flying at too high a speed. It is best to do this as they grow so they are always used to having shorter wings. While we had them in our hands we checked that their feathers were growing normally and weighed them. To our surprise at 16 days old they now weigh as much as the adults and are losing their down as their first juvenile feathers grow through, this gives them a punk hairstyle at the moment! 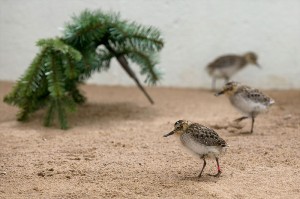 When I last saw ‘Nemo’ he looked rather forlorn and could barely stand .

What a difference a week makes, he is now running around like the other chicks and is rapidly adjusting to having a bent leg. He is a little lighter than the others in his brood but this is only to be expected, we hope he will catch up again soon.