The day the eggs arrived in the UK

This year I was gutted at not being part of the WWT team collecting the eggs as they had inconveniently arrived on a day I had “important meetings” so it was Rebecca Lee (Senior Species Conservation Officer), Sacha Dench (Head of Media) and Paul Marshall (our Web Manager) who got the privilege of chauffeuring the eggs back to Slimbridge. This was the culmination of almost two weeks of planning, uncertainty and stress.

I thought last year’s arrival was stressful, but it was nothing compared to yesterday!

Last year, our working day started at 06:05 – this year it started at 01:39 –with Nige’s text informing us that he’d cleared customs and security. Here is how the day developed: 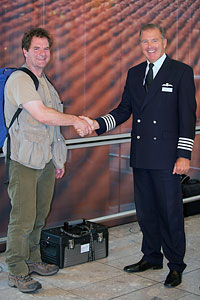 01:39, Wednesday 4 July @ Domodedovo Airport, Moscow
Text message from Nige
: I’m through! Just got to business lounge
[Becs’ reply: You are kidding me!!! You can give the Captain a ring now WOW CAN’T BELIEVE IT

01:46, Wednesday 4 July @ Domodedovo Airport, Moscow
Text message from Nige: I can’t quite believe it either. Can’t wait to get them home now. Poor lil babes. Hope they are okay
[Becs reply: Feel like happiest person on planet. Better stop dancing round house and get in shower!]

06:01, Wednesday 4 July @ Heathrow Airport
Text message from Captain Jerry Woodham (BA pilot): Hi Rebecca. We are here!!! … I’m meeting you and Nigel in terminal with extra incubator … he ran out of hands!! .. Jerry 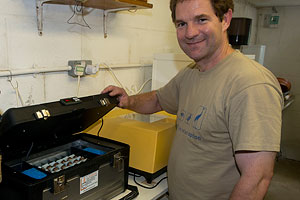 And so the 20 Spoon-billed Sandpiper eggs arrived at Slimbridge just before 10am after a monumental eight day journey from Meina – almost half way round the world!

The eggs will hatch over the coming week. It’s going to be a tense time for the team so updates may be few and far between.

I reckon we have had help from over 200 people this year and, at some point in the future, we will work this out and thank everyone. However, I would like to take the opportunity to thank a few key people without whom this egg import would have been impossible. 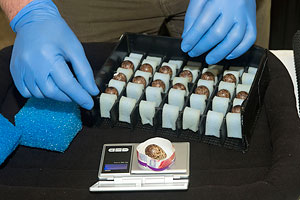 Not only did they provide free flights for WWT personnel, the assistance we have received from BA staff has been over and above the call of duty. Captain Paul Smiles (Chief Pilot Shorthaul) was incredibly helpful. Working with colleagues including Tim Price, Ben Mason and Martin Jordan, Captain Smiles helped arrange CAA clearance for the power supply and incubator and dealt with the incredibly complicated logistics of getting them on board BA Flight BA0236 to and from Moscow. Captain Jeremy Woodham (Pilot of BA0236), and apparently an avid birder, and his cabin crew took care of Nige on the flight yesterday and helped him offload his precious cargo. Last and by no means least, Mary George (Community Investment Account Manager) and Mary Barry (Community Investment Manager) arranged, re-arranged, and re-arranged flight after flight after flight. Thank you BA!

Liz Schickle (Defra vet at the Heathrow Animal Reception Centre), who was very kindly available on her mobile day and night, helped us enormously with all the necessary paperwork, met Nige off the plane, escorted the eggs through customs with him and ensured we could leave as quickly as possible. Finally, Tristan Bradfield (City of London Duty Manager at ARC) also helped us arrange the import.

My sincere apologies to anyone I might have inadvertently missed out.