As you remember, everything suddenly went very quickly and we were unexpectedly out of Meino last Tuesday,  yet again without any delay. There was little time to say goodbye to everybody!

So what has happened since: We know from Baz H. the eggs are still in Moscow, waiting for some more papers and permissions. Tom and I left the next day on the only available seats and Tom went back to Germany on the afternoon on 28th. I followed suit on 29th, well almost 28th as it was in the middle of the night.  I woke up in time for the second half of Germany – Italy, a great match, Germany lost 1:2 and of course, I could not sleep until Sergey (our excellent and very strong driver in Moscow) arrived at 02:30 to take me to Domodedovo (he took all of mine and Tom’s luggage in both hands to his car without any hesitation)!   The flight was full and they could not find a seat for me, so I was upgraded to traveller plus (quite pleasant but a bit nerve-racking during the minutes of uncertainty)!

Flying out of Meino with wonderful views of the vast wilderness was maybe too much luck. But we paid a price and got stuck in Anadyr.

Liza, Nige and a day later Liz B. followed with the eggs and incubators. The others are still stuck, but enjoy Belugas and good birds such as Siberian Accentor in Anadyr, as long as mosquitoes allow!

There is some news from Meino itself, Roland and Phil write: foggy again and rain expected, but three more nests were found in the West, all now on dummy eggs, which is very good news for headstarting and returning some back into the wild. The release pen is now completed thanks to the support of Phil and Baz S.

I would also like to thank all participants for their great contributions and cooperation; Sveta and Roman for their vital local support, the school in Meino for their gifts to schools in Myanmar and China and many others who made this expedition a huge success so far. I hope that particularly those who are stuck in Anadyr will be able to leave ASAP and that all 20 eggs will arrive safely in the UK soon.

I will now focus on activities with the rest of the flyway partners, next up coordinating autumn migration surveys in Russia, China, and the Republic of Korea amongst others. 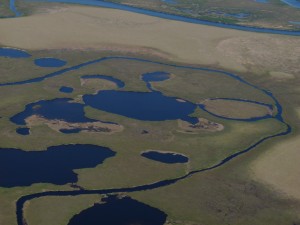 View from plane between Meino and Anadyr c Christoph Zockler