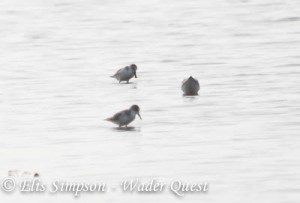 Two of our supporters, Rick and Elis Simpson, set off at the start of November on an epic trip around the world to see as many species of waders as possible and raise money for our spoon-billed sandpiper appeal at the same time.

And we’re excited to announce they’ve already seen wild spoon-billed sandpipers (and lots of other waders) in Thailand!

The duo have named the journey WaderQuest and, during the one-year long trip, aim to see as many waders as possible, raise awareness of the plight of birds such as the endangered spoon-billed sandpiper and raise donations for our appeal.

The mission started on 1 November, going firstly to Thailand and then onto United Arab Emirates, back to the United Kingdom, then off to the USA, taking them into the New Year with Australia, new Zealand and India. 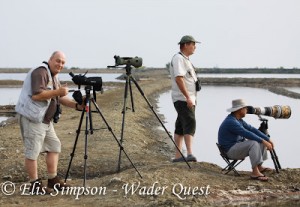 This is as far ahead that they have decided upon, but the rest of 2013 will include the Shorebird Conference in Colombia and the Migratory Bird Festival in Brazil.

At each venue they will be engaging with schools by visiting them and talking to the children and, where possible, meeting them in the field to show them the waders in their area.

You can visit their Just Giving page here and also keep up to date with their adventures (and fab pictures of the birds they’re seeing) on the WaderQuest blog.