Thanks very much Baz for providing a summary and update on the captive breeding with nice images from last summer’s breeding season. This brings back fond memories of an amazing expedition to South Chukotka.

I would like to take the opportunity to thank WWT, Birds Russia and the entire team, in particular the Russian members, who have worked with Spoon-billed Sandpiper for over 20 years, like Pavel Tomkovich and Nikolay Yakuchev, who has been visiting Meinypilgyno for seven years already. Egor, Nastya and our local team around Sveta and her husband Roman deserve a great thank you. Without their continuous support we would not be able to do all the work we achieved over the last years. Evgeny Syroechkovskiy and Liza Tambovtseva from Birds Russia were essential and although not present this year, without their work the entire expedition would not have happened.

Last but not least I would like to extend my thanks to Karin Eberhardt, Baz Scampion, Phil Palmer, Sayam Chowdhury and Tom Noah from Bangladesh, Germany, Myanmar and the UK, who joined our efforts as volunteers this year. Their help was very important when finding nests and also finishing the aviaries and release pens and many other things. Most importantly they were always cheerful, even during some more difficult periods. Baz Scampion is still working on a photo archive which could help us to identify birds individually. 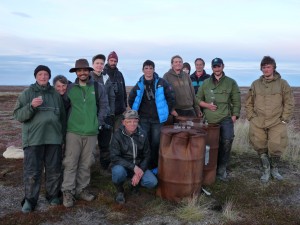 Finally I would like to use this opportunity to thank our donors and sponsors, in particular the Packard Foundation, who repeatedly supported our activities on the breeding grounds, but also BirdLife International with its Preventing Extinction Programme and of course BirdLife Species Champion Heritage Expeditions, who for the second time cruised along the Kamchatka and Chukotka coast to survey for new breeding sites – unfortunately none were found this year – and paid a visit to Meinypil’gyno in early July again.

While 28 captive bred birds continue to be in the good hands of WWT, many other activities are happening along the flyway. There are too many to mention them all, but it might be worth mentioning that there were up to 106 Spoon-billed sandpipers counted in Rudong China in mid October, refueling and moulting for their onward journey to the wintering grounds. In September and October one colour-marked bird each was observed and photographed. Both birds come from the Meinypil’gyno area from previous years. It is very comforting to see birds from Meinypil’gyno on the flyway. This means that some of the juveniles ringed as chicks have become adult birds recruiting to the breeding population.

The Rudong mudflats are not protected and reclamation of vital intertidal habitats is ongoing. We urgently need to work with our Chinese friends to change the trend and safeguard this crucial stop over site for the wild population but also for any released birds from the captive stock. 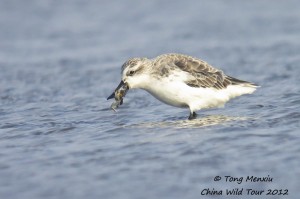