Great morning with the Slimbridge Spoonies and the WWT staff

by Saving the spoon-billed sandpiper
0 Comment
WADER QUEST
This article originally appeared on Wader Quest - www.waderquest.org/ - and is reproduced here with their kind permission

As privileges go, this was right up there with being asked to accompany Sir David Attenborough on one of his expeditions! 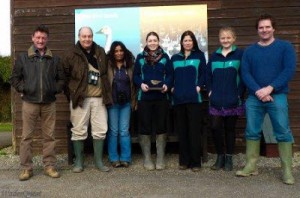 Elis and I had been invited by Dr. Baz Hughes (Head of Species Conservation Dept.) to visit the Spoon-billed Sandpiper captive breeding unit at Slimbridge where we were not only treated to a little time with the spoonies but were also delighted to meet the team that look after them, and here they are – from left to right: Baz Hughes; me with Bewick’s Swan whispering something in my ear; Elis; Nicky Hiscock holding a spoony model, Tanya (Tan) Grigg; Rebecca (Becs) Lee; Nigel Jarrett.

We were met by Becs  (Senior Species Conservation Officer and as if that were not enough also Chair of the IUCN-SSC/Wetlands International Flamingo Specialist group!) who took us down to the unit where we were introduced to Nicky Hiscock (Conservation Breeding Assistant) who is charged with the day-to-day care and monitoring of the spoonies along with Nigel Jarrett (Head of the Conservation Breeding Unit).

Once inside the unit we were asked to wash our hands and remove our outer clothing and boots. We were to wear special and very fetching green galoshes, but the trick was to step out of your own boot on the ‘dirty’ side of the board set across the vestibule and into one of the galoshes on a mat soaked with disinfectant on the ‘clean’ side. The first boot was no problem at all, using the toe of the right boot I trod on the heel of the left easily extracting my foot from it. I placed that carefully into the left galosh and wriggled my toes until the rubber heel slipped up behind my own. Now I was astride a board with one foot on the dirty side and one of the clean side and neither could enter the other zone. I was at a loss as to how to remove boot number two. Clearly I could not use the toe of the left foot as it was now on the ‘clean’ side and I could not kneel down, nor could I reach down and exert enough force on the boot to remove it.

After a moment or two of amusing herself at my predicament Becs graciously agreed to help me and knelt down to hold my dirty boot in her hand as I struggled to pull my foot from it, which having done so I swung around to the clean side with such vigour that I nearly fell over, I think that neither Becs, nor Nicky, who was there to greet us were terribly impressed by my dexterity. Of course Elis manged all this with much aplomb, grace and the minimal amount of fuss.

Nicky then showed us around the unit. The two pens themselves were shut off from the corridor where we stood so viewing was only possible through some darkened glass that did not allow the birds to see out. It was all rather gloomy at first and took some getting used to, but once your eyes become adjusted it becomes increasingly easy to watch the birds scurry hither and thither about their ‘habitat’. However even though our eyes adjusted in time, the cameras did not and photography was really quite difficult in the low light levels.

Elis and I savoured every moment that we were allowed with these little birds and it brought back very good memories of that day in November when we saw them at Pak Thale in Thailand. It was a special treat to see one group still in the colourful juvenile plumage as we had only seen them in winter plumage in Thailand. We watched them feeding, bathing, even arguing and all the while listening to the calls they made as they went about their business.

It was a sobering thought that these birds represented perhaps as much as 10% of the world population of this species.

Nigel joined us, and together he and Nicky told us about some of the trials and tribulations they had been experiencing being the protectors of these birds. As described earlier, in order for us to be allowed into the unit at all we had to make sure we were not carrying any bugs that could cause tremendous harm to these birds, it would be possible to wipe them 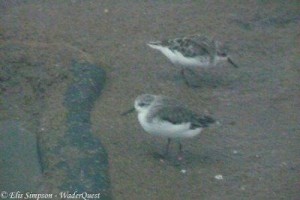 out with one single careless stroke. For this reason Nicky, Nigel and Tan (Part-time Breeding Assistant who covers some 30% of the work and also works in the WWT shop) who look after the birds have to be ever vigilant and monitor the birds with an expert eye and even more so make sure visitors are following strict cleanliness protocols.

The trio have to watch the birds in between bouts of cleaning and feeding, watching for any tell-tale behavioural activity or changes from the norm. Everything has to be painstakingly written up, however small it may seem at the time in case it becomes important in the future. The responsibility of these three cannot be underestimated and we all owe them a big vote of thanks for the work they are doing on all our behalves.

Of course it is not all onerous and we were told some of the amusing and endearing tales that surely go along with any sort of animal husbandry.

The birds seemed quite at home in their warm and secure ‘habitats’, we watched them behaving in exactly the same way that they did in the wild, but one curious thing that I don’t remember witnessing in Thailand was seeing one bird walking backwards while feeding, Nicky said that she had seen this happen quite a lot. 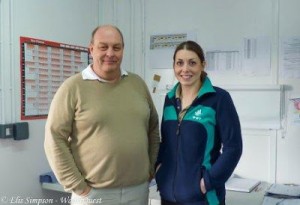 We did a short interview with Nicky (which we will post as another blog later) which descended into typical Simpson farce when the microphone fell from the waste bin upon which it was resting, our professional camera operator (Elis) was getting so engrossed in the story that Nicky was relating that she forgot that the microphone was connected to the camera and moved to get a better angle dislodging it in the process and interrupting one heck of a story! We had used a microphone on this occasion to cut down on extraneous noise that was coming from outside where new enclosures are being constructed.

We all then met up with Becs again in the canteen where we were joined by Baz and Tan. We discussed the future for Wader Quest and explained to them our current position and our plans for a restart.

We also had a brief encounter once more with Martin McGill but were sorry to miss Ellie this time, by the time we had finished and went in search of her she had left to do some work at Martin Mere; hopefully we’ll catch up with her next time.

After we were left to our own devices we went to check the flooded fields called Tack Piece where we encountered thousands of Northern Lapwings and Eurasian Golden Plover, interspersed with a number of Dunlin, a few Common Redshank and a single Eurasian Curlew.

We left Slimbridge on a high, happy that the money we are trying to raise is going to a very good cause and that those who are charged with the responsibility of caring for these little gems are not only very professional but have obviously melded into an efficient team and in addition are also extremely friendly and affable people.

The spoonies are in good hands and your donations will be very well spent helping these good people save the Spoon-billed Sandpiper from a fate worse than death – EXTINCTION!.