Update on the Slimbridge flock 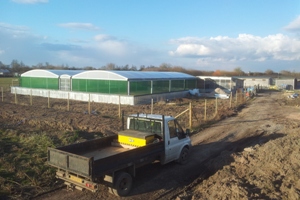 The birds’ new summer accommodation is almost finished. The polytunnel is up and within it are both the non-breeding birds’ summer living quarters and separate enclosures for breeding pairs.

After a few weeks of groundworks and construction, all that needs to be done now is setup the ponds and lay the substrate the birds will be living on – a mix of sand, grassy tussocks and sedum (short, succulent plants that grow under quite dry conditions).

We have also completed work on the birds’ winter accommodation to improve their day-to-day care and general well-being. We have fitted windows – something we initially left out, as we were concerned they might be a hazard or a stressor to the birds. We have also put in more light fittings to increase the light levels on dull, dreary days outside. These lights can also be dimmed so that we can mimic dawn and dusk for the birds as they would experience them in the wild. 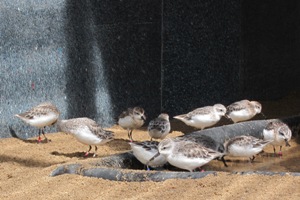 The moult in all of our birds has been delayed when compared to that of wild Spoon-billed Sandpipers, and the birds are also at differing stages to one another despite being exposed to the same conditions. We hope that the additional light from the windows and new lights will  help to speed up and better synchronise the birds’ moult cycles.

There have been some particularly interesting changes in the behaviour and appearance of the eldest group of birds – those collected in the summer of 2011. Three (nearly four) members of this flock are now in full summer breeding plumage with the others following closely behind. The birds look really striking, sporting the characteristic deep red head and neck. They continue to moult – we are finding feathers in the enclosure daily – and we hope that the others will catch up very soon.

This progression in moult has coincided with an increase in aggressive displays and territorial behaviour from some of the more dominant birds. It seems this rush of hormones causing the birds to moult has also caused them to exhibit new interesting behaviours. ‘Blue L’ has become very fond of an area of the pond in their enclosure, nearest the water jets. It will relentlessly chase other birds from this area with its wings fully outstretched and its head down whilst giving loud shrill calls. It will also ‘dance’ around this area of the pond, rapidly spinning in circles, occasionally opening its wings, as if it is playing in the jets of water. 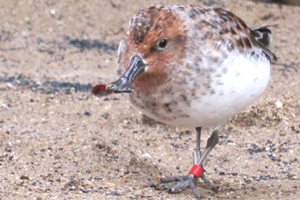 Another bird, Pink R, has become notoriously dominant and frequently displays aggressively. It recently showed a new and interesting technique for chasing other birds away from its ‘patch’. Whilst calling rapidly, it crouched very low in the pond and waited for another bird to approach it. Once close up, Pink R, jumped up out of the water with wings outstretched, as if it was almost pouncing on the other bird.

All of the 2011 flock are now fully able to fly, having moulted through new wing feathers. It is fantastic to see the birds whizzing in circles, high around the enclosure – sometimes around my head. They are very good flyers, with advanced manoeuvrability and agility in the air. We have had a small number of minor bumps as the birds get used to this new found freedom but nothing to worry about.

Moult is not only confined to the eldest flock, the younger birds which hatched in summer 2012 have almost completed their post-juvenile moult. We have been finding dropped juvenile feathers for around eight weeks. Most of the birds are now in full winter plumage with only a couple of birds holding on to just a few juvenile plumage feathers. They are looking great with their bright, silvery backs, heads and faces. 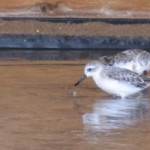 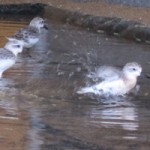 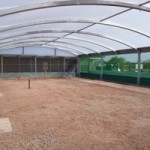 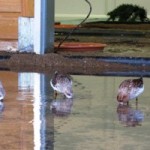 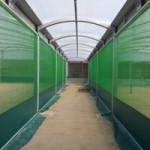 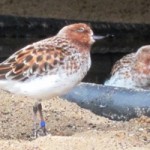 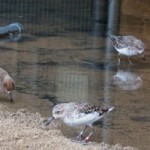 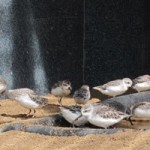 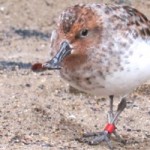 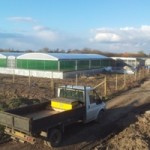