22/05, got an invite from Andre to cross the ice on the second river and go out onto the coastal spit to see the whales and sea birds at close range. Thus far they’ve only been viewable through a scope at the river mouth (still very impressive, but will be better at close range). Sadly the weather took a turn for the worse with really stormy, freezing winds from the North. Andre said it would be better to wait until the wind dropped (maybe tomorrow). On the plus side, it gave me more time to get things sorted in the house.  Pavel and Egor crossed onto the coastal spit 5km or so to the east and Egor got a real soaking from a giant wave. Fortunately, rather than helping Pavel took a really good photo of the event! [If the internet connection improves, I’ll post the picture] 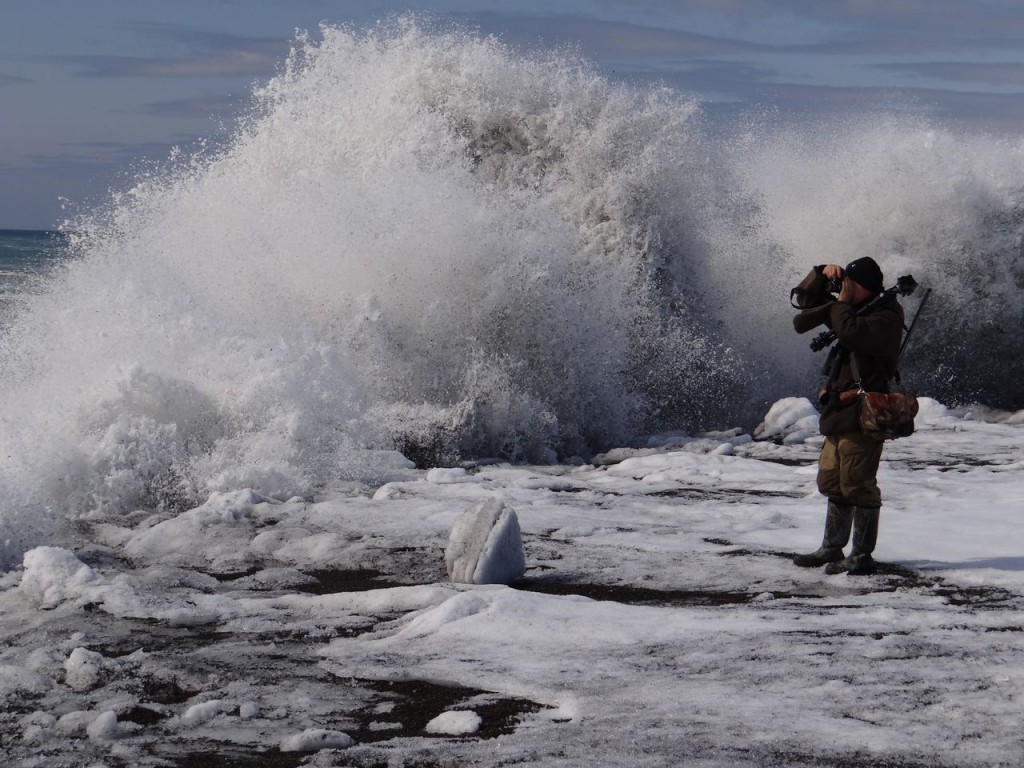 23/05, The weather had deteriorated over night, much colder, with wind chill of -11 degrees C. To add to that there was horizontal snow blasting past the window! Another day to get things sorted in the house. Although I have the feeling that if I was working on a building site I would be being accused of stringing out the job. But it’s better to keep busy even if at times it means doing the same job twice! Cabin fever finally got to Pavel and Egor in the afternoon and they decided to go out and check the red knot breeding area for new arrivals. They returned very quickly and were both very cold. Egor in particular as he was heavily encrusted in snow! I intend to wait until the blizzard stops before leaving the house, even if it means doing the same jobs 3 times!

24/05, At last! The wind has finally dropped and although there are a few snow flurries the sun looks like it might even shine! Made it out to the coastal spit by 09:30 hrs and what a sight! At least 50 whales scattered across the bay and a good number in very close around 20m from the shore. So close we kept getting blasts of their very smelly breath. Thousands of sea ducks: mostly long-tailed and harlequin ducks, but good numbers of Pacific eiders, scaup, goldeneye and red-breasted mergansers. Inside the first river, there were also European and American wigeon, teal and pintail. Skuas were also starting to migrate up the coast with small groups of pomarine, arctic and long-tailed skuas. Given that the arctic skuas are one of the main predators of spoonie chicks, let’s hope these ones are just passing through and don’t stop! Waders were also showing well now; mostly turnstones, but also red knot looking stunning in their breeding plumage, dunlin and, a first for me, a wandering tattler. This bird was so tame it happily fed a metre from me whilst I took hundreds of photos of it. Later on I recorded my first grebes and divers, red-throated for the latter and red-necked and horned for the grebes, with horned grebe being another lifer for me! All in all, especially after the previous two days, a real day to remember for the rest of my life!

25/05, Surveying has now started in earnest as enough of the snow has melted to get to some of the areas and for the birds to settle and start forming territories. It’s still very hard going and I’m going to be a lot fitter by the time we collect the first spoonie clutches, trudging across gravel spits, whilst occasionally falling through snow drifts and ice patches. An area known as the third river, held a good number of pintail, wigeon and teal along with some very wary Pacific white-fronted geese (still a few more days of the hunting season to go for these guys) and a couple of pairs of lesser sandhill cranes. In the moraine hills a Pacific golden plover was proclaiming his territory and in some places there were good numbers of lapland buntings, buff-breasted and red-throated pipits, skylarks and northern wheatears along with the every present white wagtails. When walking back to the village I came across a displaying ringed plover, all good signs that spring is here to stay. A good day; but the real highlight, was a peregrine falcon hunting wigeon along the third river. I never tire of seeing these birds’ incredible stoops when hunting!

26/05, Another day of surveying. Lots of the local villagers were out hunting geese, making the most of the good weather and last few days of the brief hunting window. Not wanting to disturb what is, in effect, a rare opportunity to obtain fresh and sustainable meat, I kept back from areas where they were hunting. I was rewarded by some amazing views of a gyrfalcon; first, with its souslik prey (a ground squirrel) and then being robbed by three ravens. It was not at all happy about this but, given the opposition, there was not much it could do apart from put in a few half hearted stoops to attempt to drive them away and then sit 20m away from them on the tundra and sulk, whilst they feasted on their ill gotten gains. More Pacific golden and ringed plovers displaying and Pavel informed me that the red knot are also displaying and some of the birds he leg-flagged in previous years had returned.