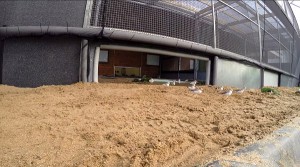 The captive spoon-billed sandpiper flock at Slimbridge last week made the first stage of their ‘journey’ towards breeding successfully.

Months of preparation have gone into creating open air aviaries for the birds, which will mimic their summer breeding grounds, as well as being divisible to give pairs their own territories.

The first stage is to move them from the largely indoor wintering aviaries, where they have been for the first years of their lives, to an outdoor interim area.

Their wintering aviaries are designed to mimic the environment of tropical Asian estuarine mudflats, with heat and light artificially set throughout winter. Their new area is designed to feel like the coastal saltpan pools of eastern china and the yellow sea, where they stage on migration. Within a few weeks they will be moved to a tundra area that will be planted with short, salt-resistant grass, sedums and tufted grass. 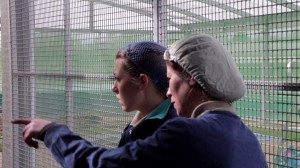 “It’s a big day for the birds and a tense one for us. We’re essentially ‘migrating’ the birds north, albeit about a foot through a pop hole in the side of their aviary.

“This is the first stage, to ‘China’. For them it’s a much bigger space with far more direct sunlight. It’s the big outdoors and we had no idea how jumpy that would make them.

“But it went really well. We left the pop hole open and that piqued their curiosity and pretty soon they were all in there. Within minutes they were bathing in the new pool, which is a sure sign that they’re comfortable, and tucking into some bloodworms. 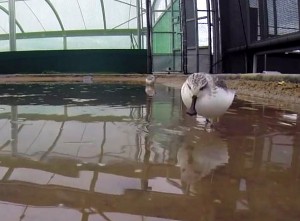 “The next few weeks are going to be fascinating. No one has ever before witnessed birds like this pairing up. It’s completely unknown behaviour, but we suspect that we’re going to see the effect of a surge of hormones that’ll make the birds less sociable and possibly bring out some aggression, particularly around the food that we give them. This would all actually be good behaviour that will hopefully lead to them getting territorial and falling in love!”