Spring is on the way- for wild and captive Spoonies!

Dr Nigel Clark from the BTO came to visit the spoon-billed sandpiper breeding facility on Tuesday to check on the birds. He writes… 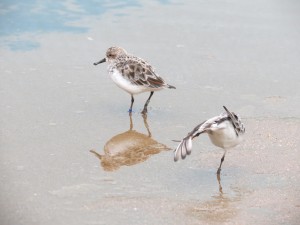 Monday was a red letter day for the project with spoonie ‘Lime 8’ being seen in Taiwan on spring passage back to the breeding grounds.

This is the first sighting of one of the nine headstarted spoonies from 2012, which was the first year we tried it.

Furthermore it was starting to come into breeding plumage just like the other birds it was with, suggesting that hand-rearing had not affected its urge to breed.

We also have 14 spoonies from the 20 eggs that were collected in 2012 at the WWT in Slimbridge. On Tuesday I made my monthly visit to see the captive birds. As I sat in endless queues of traffic on the M6 I wondered how their breeding plumage was developing and whether it was at the same stage as Lime 8.

As I walked up towards the aviaries I could hear more spoonie chatter than on past visits. All the birds are together and able to move at will between five areas and as I looked in each area there were birds everywhere,  so I went into the new outside communal area and sat in one corner to observe their behaviour and asses the state of their breeding plumage. 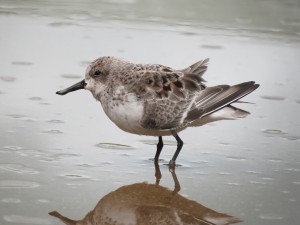 I was immediately struck by the increase in interactions between the birds. In the past they have tended to spend a lot of time in flocks but have normally not interacted very much.  Today they seemed much more aware of other birds presence and they seemed to be checking who was near them. Often this would result in a peck or even a chase. It was as if each was showing a different character may be as a result of their hormones changing?

Scoring the plumage of 25 birds that are moving a lot proved much more difficult than two smaller groups and it took two hours to record the plumage of all of them.

The captive birds have a way to go yet until they are in full breeding plumage but everything is looking encouraging. Lime 8 still has almost 6,000 km to fly to get to the breeding grounds, whereas the captive birds only need to migrate a few metres, so the next couple of months will be an exciting time. They will be split into a range of pairs and groups as we try different ways to encourage them to breed. Only time will tell which will work!