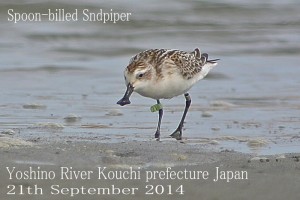 A spoon-billed sandpiper that hatched in the wild this summer at Meinypilgyno has been spotted on migration in Japan.

Japanese birder Kouhei Shinomiya photographed the bird on the Yoshino River in Tokushima Prefecture. The inscription J1 on its lime green leg flag is clear in the photograph.

Roland Digby confirmed from records of this summers expedition that the bird was part of a replacement clutch – the second clutch that a pair will lay after the first clutch has been taken for headstarting. As such it was hatched and reared in the wild. It was one of a clutch of three that were fitted with leg flags on 18 July.

The news helps shape a picture of the spoon-billed sandpiper migration. Adult birds set off from the breeding grounds before the juveniles and it seems most of the species moult at Rudong in China. The juveniles set off slightly later and records like this suggest that they stop over in Japan.