by Saving the spoon-billed sandpiper
5 Comments

Nigel Clark wrote on the start of autumn surveys for Spoon-billed Sandpipers along the Jiangsu Province coastline, in China. Guy Anderson takes up the story…

The tide is falling.  The huge mudflats on the Chinese east coast are revealing themselves again, a twice daily disappearing and reappearing act.  The thousands of waders that rely on this coast to fuel their epic annual travels up and down this flyway know this. The big snoozing flocks on dry land behind the sea wall wake up, the noise level of chittering and whistling increases and they flow back over and on to their glistening dining table once more. Our line of observers ready themselves, point their scopes at the weaving, scuttling hoards and start looking for ‘spoonies’. We know this coast is important for Spoon-billed Sandpipers in both their spring and autumn migration, but not exactly how many are here, nor which individuals are in town. So we aim to find out.

‘We’ are a team lead by SBS in China with five experienced wader observers from the UK; Nigel Clark from BTO, James Phillips from Natural England, Guy Anderson and Andy Schofield from RSPB and Rich Hearn from WWT.  Supported by the RSPB, WWT, MBZ Species Conservation Fund, and the participants, the team has come together to survey the autumn concentration of spoonies on the Jiangsu Province coastline, 3 hours drive north of Shanghai. 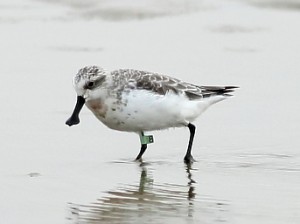 Back in the spring, I wrote from the same place on the northward spring migration.  Then the spoonies were in full breeding plumage finery – and quickly moving on, the urge to breed pushing them on to their breeding areas in the far north east of Russia.  Now they are on their way back south, stopping for longer in China – at least a month – to feed and restore their energy levels. This allows them to moult all their feathers here to get them through another year.

Nigel has already described our first few days surveying this autumn, and how we’ve found ‘Lime 04’, one of the two individually marked adult spoonies we saw heading north in spring. He also reported that we’d seen ‘Lime 01’, known as the ‘Monument Male’ – the star of the spoony world, and we’ve seen him again too – still on his favourite patch of mud.

As well as there being more marked adults to search for now, thanks to the Birds Russia/WWT team studying spoonies on the breeding grounds, there are also a few flagged wild-bred juveniles and at least 24 ‘head-started’ juveniles.

We scan through thousands of Dunlin, Kentish and Lesser Sand Plovers, fresh from their high tide snooze.  We soon find a spoony – smaller, paler and greyer – a monochrome ghostly pale version of the brick red fronted summer plumage birds we saw in spring.  Hyperactive – constantly ‘stitching’ its (still frankly ridiculous) spoon-shaped beak into shallow pools, like an avian sewing machine, searching for tasty morsels. Then we find another, and another, and another, and they just keep on coming. 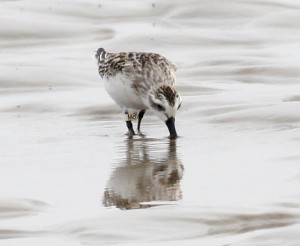 On one incredible day, we find at least 142 birds just at one site. Even better, we find several flagged birds, mostly adults caught and marked on the breeding grounds, but also two headstarted birds: ‘Lime 8’, from 2012, which bred successfully this year, and ‘White M8’ from 2014. White M8 is an obvious juvenile bird, with browner, more mottled plumage than the adults. This, and another sighting of a wild-hatched 2014 juvenile in Japan (Lime J1) is great news – it gives us more confidence that head-started birds can survive and migrate successfully like their wild reared cousins .

This is obviously a vital place for spoonies – a significant proportion of the world population is here in autumn. That’s not to mention the huge numbers of other waders doing the same – including the globally threatened Nordmann’s Greenshank, and Great Knot and Eastern Curlew.  But it is no safe paradise. We find dead and dying waders at one site – deliberately poisoned for human consumption? We also find dead and dying waders in a long line of fishing nets set over the mudflats. Not intended for birds, but deadly to any that blunder into it.  And we find a few both dead and alive accidentally caught in long lines of crab traps. We release those we find alive before the rising tide drowns them.  Thankfully this time we find no dead spoonies but surely it’s only a matter of time before some run out of luck. 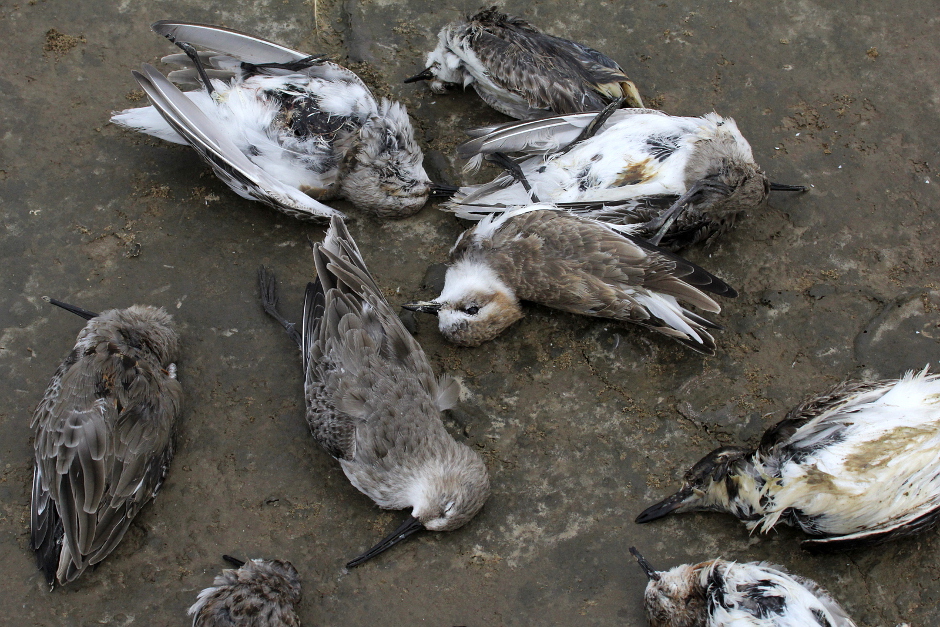 Just some of the dead and dying birds showing signs of poisoning: Red-necked Stints, Kentish and Lesser Sand Plovers, Dunlin and even a Red-necked Phalarope. Thankfully we didn’t find any spoonies. For now. (c) Guy Anderson

Our friends at SBS in China contact the local authorities and warn them of these acute dangers faced by the birds. They are also well aware of the longer term threat posed by huge planned land claim projects which will turn mudflat into dry land and concrete. The birds have other local friends too. The China Coastal Waterbird Census Team has surveyed this coast regularly since 2010 and their data have helped focus attention on the numbers of spoonies and other wader found here. SBS in China have teamed up with local schools and the Links Hotel in Yangkou town to raise awareness of the global importance of this coastline, the fabulous bird migration spectacle it has to offer and the threats the birds face.

So will our spoonies survive the autumn?  Will they make it back to Russia next summer? Will the survey team find any more flagged birds? There’s more to come from survey work here this year, so tune in next time folks, for more tales from the mudflats.