An international team has just arrived in Myanmar to survey Spoon-billed Sandpipers in the Gulf of Mottama. While we wait for their news, here is an account of a recent holiday visit to the country from Sash Tusa.

The tide was still rising, and we had agreed to postpone lunch for the second day running, Breakfast felt an increasingly long time away as, for the umpteenth time, I scanned the large flock of waders on a beach in southern Myanmar. Literally thousands of Kentish Plovers (!), a few dozen Sand Plovers (for the life of me, I cannot separate Greaters from Lessers, certainly in winter) and ones and twos of a wide range of other species. The birds were forming a roost on a sandbank near the top of the beach, but they were agile, with small groups constantly moving around, and occasionally taking flight for a few seconds in the stiff breeze. They were around 150 metres away, and we had taken turns using my scope; I was trying methodically to work my way from one side of the flock to the other, identifying each bird in turn.

Suddenly, I saw it: a tiny, black and white wader, small even by the standards of the Little Stints elsewhere  in the flock. It was a bright bird, too, almost like a miniscule Sanderling. I tried to keep the scope on it, wound up the magnification, and fiddled with the focus. Just like you do with every wader that you cannot immediately identify amongst the Kentish masses.

It was side on, not feeding, and had a black bill. But not an unusual shape from that angle. Then it turned head on, for just a few seconds, and I saw it: that astonishing diamond-shaped bill tip, and a white forehead! I tried to keep my voice calm: “Lay Win! Come and have a look at this?” Lay Win was, understandably, a little sceptical, and asked what I had found: all the previous day I had mistakenly “called” a variety of plovers and stints. But he humoured me, and gazed through the scope for what seemed an hour (actually only a few minutes). Then his body visibly relaxed, and he beamed: we had found a Spoon-billed Sandpiper! 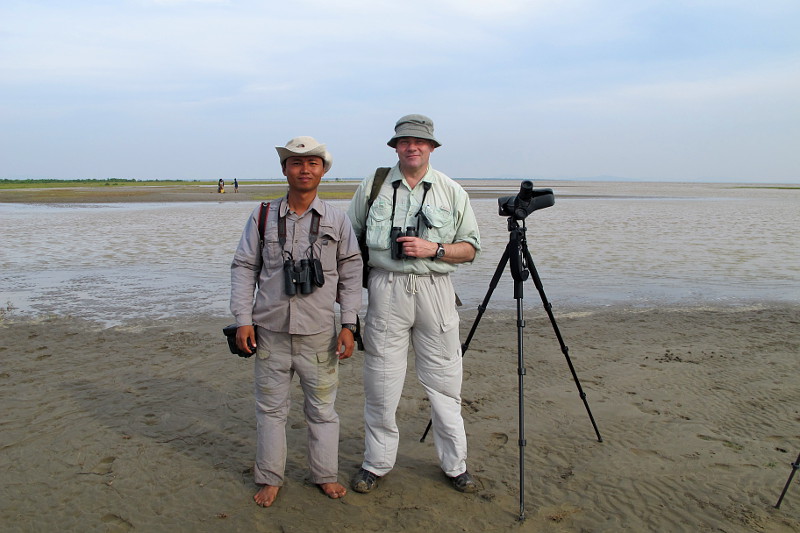 This happened on 22 December 2014, and the bird (alas, an un-tagged one) was possibly the first to be seen on the Gulf of Martaban in southern Myanmar since the previous winter. I was on a holiday with my wife and 3 adult children, and had negotiated with them, as part of a package otherwise dominated by temples and tourist spots, a couple of days down in the South of the country looking for wildlife. I had asked our travel agent if it would be possible to look for Spoonies, and was incredibly fortunate that the guide that they arranged for this stage of the trip was Lay Win. He is one of the more experienced birding guides in Myanmar, a really dedicated conservationist, and excellent company for a family of non-birders as well as a birder (i.e. myself)!

We stayed in Mawlamyine, a city that is about a day’s drive from Yangon. For our two full days there Lay Win and I left at around dawn (0600) for the 90-120 minute drive up the coast to the fishing village of Ah Lert. This is on the north bank of the Salween River estuary, and effectively marks the southern edge of the Gulf of Martaban. Once at the village, we worked different areas of mud flats and sandy shore in the general area, waiting for the rising tide to cover the several miles of astonishingly flat, shallow sand, and drive the waders to a number of high tide roosts. The birding was great fun: as well as waders, there were Bee Eaters feeding above the village, Siberian Stonechats and Brown Shrikes in the paddy fields, and a range of egrets and herons. Waders that even I see frequently in the UK (we really don’t get many species in Pembrokeshire!), such as Curlew, Whimbrel, Sanderling, Red Knot and Dunlin, all seemed scarcities in Myanmar. But the Kentish Plover abounded, and amongst the Stints and Curlew Sandpiper were Broad-billed Sandpipers and Sand Plovers. And I would have been very content indeed, had we not found the Spoonie, with the Terek Sandpiper that was feeding on the beach on our second morning! 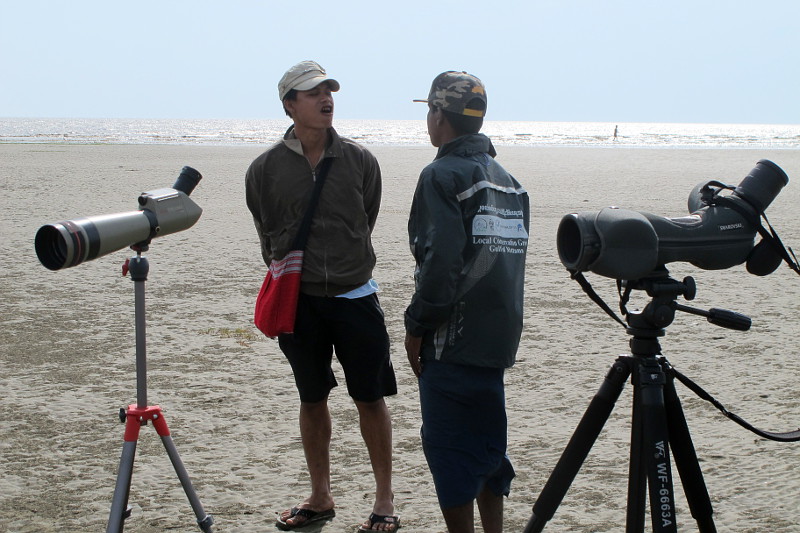 If looking for a Spoon-billed Sandpiper in Myanmar is “eco-tourism”, then I recommend it highly. In the broader scheme of a family holiday, it took us all to part of the country that is undeservedly off the “tourist trial”. Mawlamyine and the surrounding Mon State is a fantastic area to visit, especially for anyone that wishes to track down where George Orwell lived and wrote about, and which inspired Rudyard Kipling to write “The Road to Mandalay”. The people are incredibly friendly, and the Gulf of Martaban area is a fascinating area to watch, with its Ramsar designation but also vibrant fishing communities. We hope that we helped, if only in a tiny way, the conservation of the Spoon-billed Sandpiper, by demonstrating to the communities that we interacted with the potential benefits for them, in terms of tourism and associated spending.

As for seeing the Spoonie, if only for seconds: I never thought it would be such an emotional event! 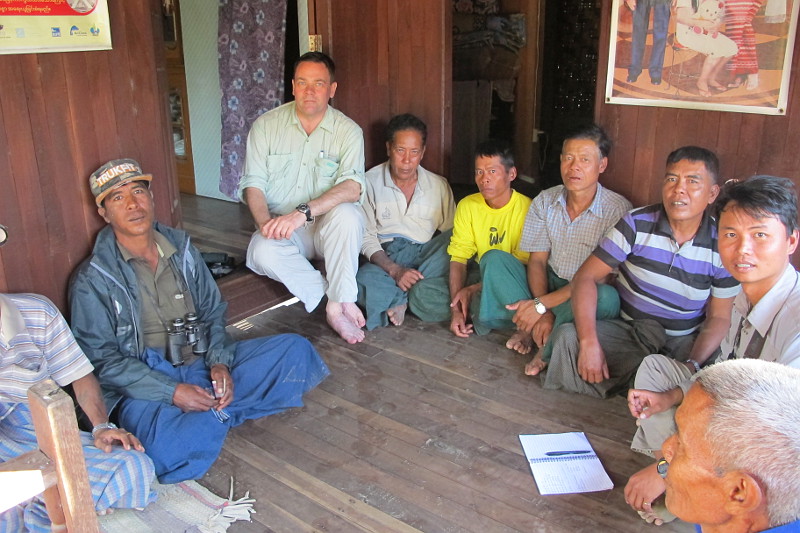 Sash at a meeting with villagers (c) Sash Tusa

When to go, and what to take

Spoon-billed Sandpipers seem to winter in the Gulf of Martaban area from late December to early March; January and February are probably the best bets (and this coincides with the peak of the tourism season in the rest of Myanmar). Lay Win knows as much as anyone about where to find them: he spends much of his time surveying the birds, using boats to get to sandbanks and other inaccessible areas.

Binoculars are clearly useful, but a good telescope is utterly essential, along with a very stable tripod. Neither of these is available in Myanmar. The distances to the birds are long, and winds can be very high. So be prepared to leave other clothes etc. out of your luggage in favour of good optics: it will be worth it!

Sash is, in his spare time, a Trustee and Vice Chair of the Wildlife Trust of South & West Wales. He therefore spends much of his time working to conserve auks, Manx Shearwaters and other seabirds in west Wales. He is banned by his family from “twitching” any rare birds more than 2 miles from his cottage there.