The one and only photo from Meina!

Sorry for the silence everyone. It’s been all hands to the pumps, both here at Slimbridge and in Meina.

What’s more the team in Meina are struggling with one of the dodgiest internet connections they’ve had in recent years, but we can now reveal the one photo and only photo they’ve managed to get through to us. More on that and what it shows below.

That’s not the only problem they’ve had to deal with. Flooding and difficult weather conditions have made fieldwork challenging, but despite all this the Birds Russia and WWT field team have had an excellent year so far.

The first spoony was seen on 3 June and the first nest found twelve days later. At least 11 pairs as well as a number of single birds have now been seen at the breeding grounds, and among them are 18 marked individuals. Of the 18 marked birds, four are headstarted birds!

This is truly fantastic news. We don’t yet have enough data to calculate return rates for the headstarted birds, but what we’re seeing so far suggests they are surviving well and therefore their period in captivity isn’t affecting their fitness.

The photo shows the headstarted spoony marked with a white leg flag engraved MA. He was hatched on 5 July 2013 and released at 20 days old. He hung around on the breeding grounds with the other juvenile spoonies till 6 August before migrating. He then disappeared off the radar until he was seen and photographed by Zhang Wei in Fucheng in southern China on 18 January 2015. He hadn’t been seen again until he turned up at the breeding grounds this summer. 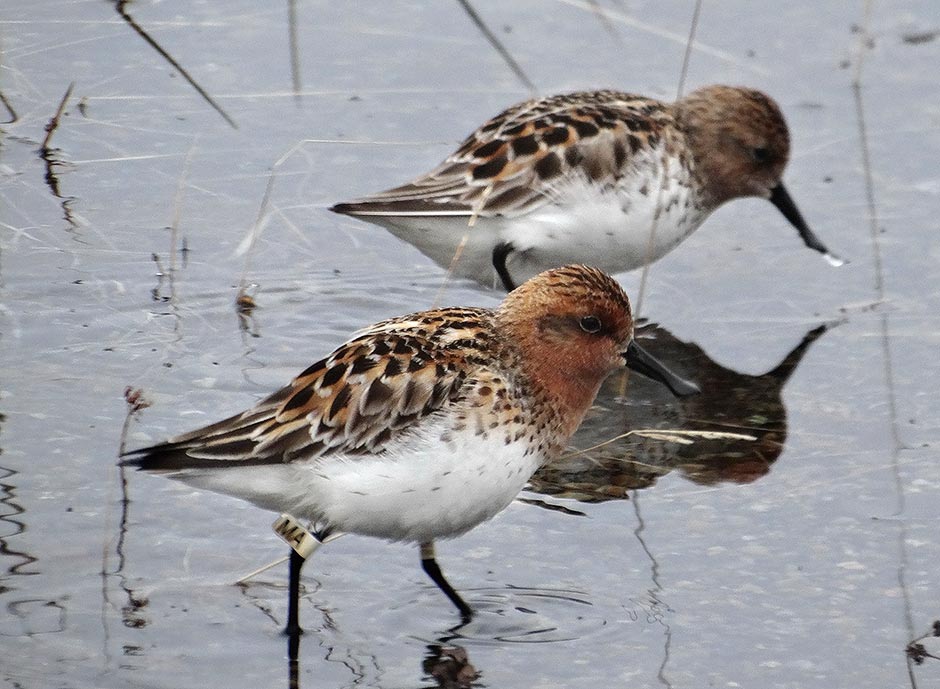 The great news is that he’s paired up with an unmarked female (she hasn’t been ringed by the field team). They’ve laid a clutch of four eggs, which have all been collected for headstarting. It looks like Roland is going to become a grandfather again!

Excitements aside, the team still have plenty to keep them busy. This week they’re building the release pen so they can then focus on the early stage rearing – which is going to be very hectic this year.

Hope you manage to get some sleep guys!

Back home in Slimbridge, despite the considerable efforts of our conservation breeding team, none of the spoonie flock have bred this year. We still have 24 birds (8 females and 16 males) and initially signs were positive. Females appeared to develop better breeding plumage than in 2014 and showed a greater interest in the males, including joining in displays and lifting their tails to the males. In recent weeks, however, this behaviour hasn’t developed as we would have expected were the birds to breed. Nest scraping and calling is continuing but we now do not expect the birds to produce eggs.

The team put a lot of effort into getting conditions right for the birds. It is a real challenge. There’s no manual for breeding spoon-billed sandpipers. This has never been tried before. Even though we’re in touch with wader breeders around the world, there’s little in the way of documented research, so part of what we’re doing is documenting the different tactics we’re trying and gradually getting closer to our goal.

Fingers crossed for next year.