Headstarting continued: more great news from further along the flyway

The physical component of headstarting for me finished on 2 August, but the reality is that work never stops with any aspect of this project. There is always planning and preparation for the next year and, most excitingly for me, there are the reports from further along the flyway.

Once the birds have migrated then that is really that and we have no further control over what happens to them and, for all of us, this is a time of anticipation mixed with a little bit of worry. Generally we have a four week lull whilst the birds leapfrog their way south, down through Kamchatka, where M9 was observed on 24 August 2014. Most of our sightings however, come from, South Korea, Japan and of course Rudong in China.

This year there were no reports of our birds from Kamchatka and we had to wait until 4 September for our first report of a 2015 headstarted bird, this one coming from Hokkaido in Japan. 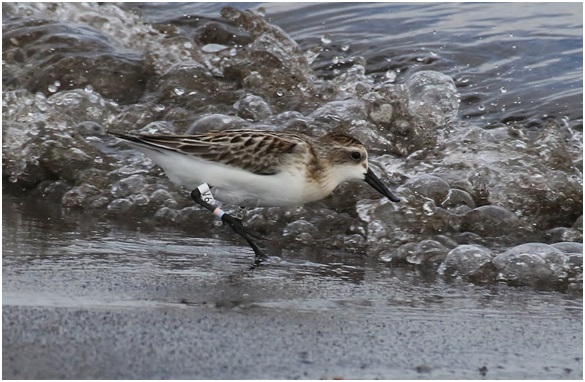 It’s always a great relief to hear that one of our birds is doing well and to get such fantastic photos is also a real treat. The first 2015 headstarted bird to be resighted was white V6, safely making its way to Japan, being observed on 4 September, 19 days after it had last been observed in Chukotka. V6 had been the last spoon-billed sandpiper observed on the release site in Meinypil’gyno, a full 8 days after the majority of the birds had migrated. V6 had also been the last of our birds to hatch and compared to some of the others a little bit on the small and weak side. It was one of three other birds this year that we needed to keep and extra eye on the make sure it was feeding and growing properly. Nevertheless, after an initially slow start the bird grew well and from the photo it is still doing well. This also goes to show that, so long as the extra time spent with some of the smaller weaker birds doesn’t compromise the wellbeing of the bulk of the healthy individuals, then it’s always worth persevering.

We did not have to wait long for our next bit of good news and this for certain was good, being the first confirmation of the F1 generation of wild reared spoon-billed sandpipers from headstarted parents. With this bird in question H3, the offspring of the female; white LA and an unmarked male. This pair had been particularly cunning and had evaded all efforts to find their nest, by both human field team and wild predators such as foxes, ravens and the ever present arctic skuas. This had been a particular achievement, as nest predation was quite high this year, with vole numbers being particularly low. 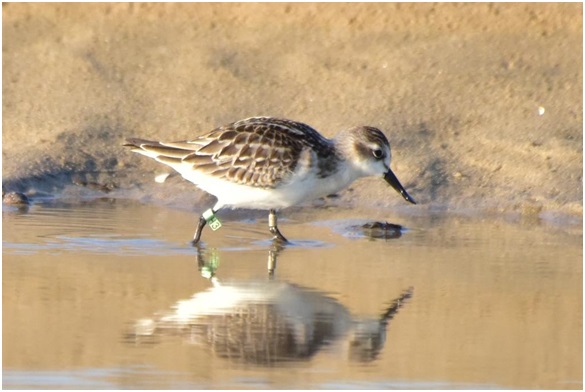 H3 was first discovered by Pavel Tomkovich just before it was ready to fledge on 24 July. Along with H3 were two other siblings due to the fact the brood was at the point of fledging, he was only able to capture and mark one individual, so potentially there could be another two of H3’s siblings out there. However, without colour marking, we shall never know. Thus this goes to show the importance of having colour marking which enables us to be able to effectively monitor the success of headstarting.

More good news was to come from South Korea regarding resightings of 2015 headstarted birds with two more positive identifications of birds. On 28 September U6 was observed at Yuboo-Island tidal flats in South Korea. Interestingly U6 is the sibling of V6 observed earlier in Hokkaido, although as a larger and stronger chick U6 was one of the earlier birds to migrate, being last observed in Chukotka on 5 August, migrating a whole 11 days before its sibling. 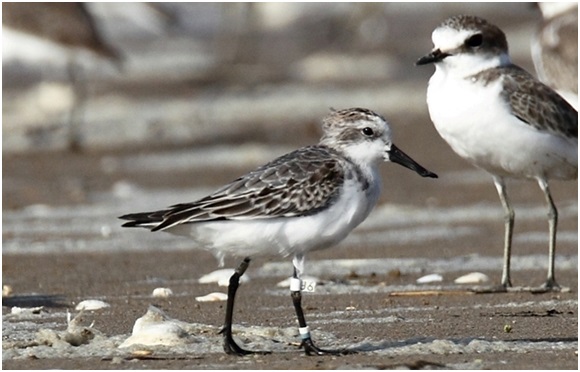 Within 24 hours of the sighting of white U6 we received news of another sighting of a 2015 bird. This time the individual was; white M7, last observed in Meinypil’gyno on 7 August when it was 30 days old. 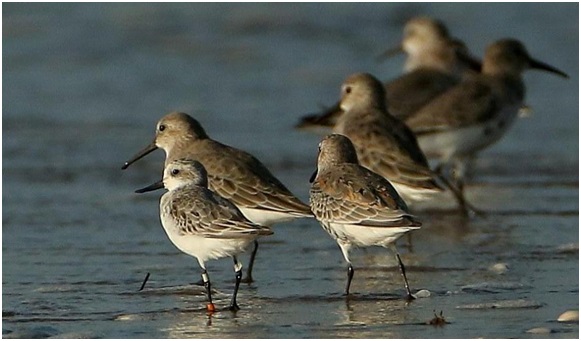 As well as the sightings from the 2015 headstarted cohort, on 15 October, the team of South Korean observers also reported a 2014 bird; white U9. 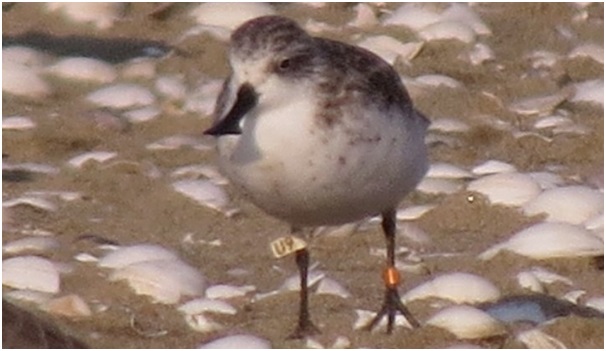 White U9 was first resighted in Chukotka on 9 June this summer aged around 11 months a year earlier than would be expected for most young birds, who usually return at around 2 years of age. Although in full summer plumage, the female U9 did not breed, spurning the attention of the males that tried to court her attention, being last observed in Chukotka at the end of June. We were therefore particularly happy when the report with attached photograph came in from South Korea, showing that she was alive and well.

These sightings, along with the other sightings of non-headstarted birds go to show the importance of the Yuboo-Island mudflats and the surrounding areas of the Geum estuary, especially as a stop off area for juvenile spoon-billed sandpipers as they attempt their first perilous migrations south.

The colour marking of the birds is also helping us to understand the movements of the birds during their first eighteen months or so of life, as this is an area where thus far information has been quite scant. Volunteers with the conservation leadership program being run by SBS in China sent us a number of important reports of 2014 birds observed whilst the autumn migration stop off counts were being carried out. The first to be observed was; white T8, on 22 September at Dongling. 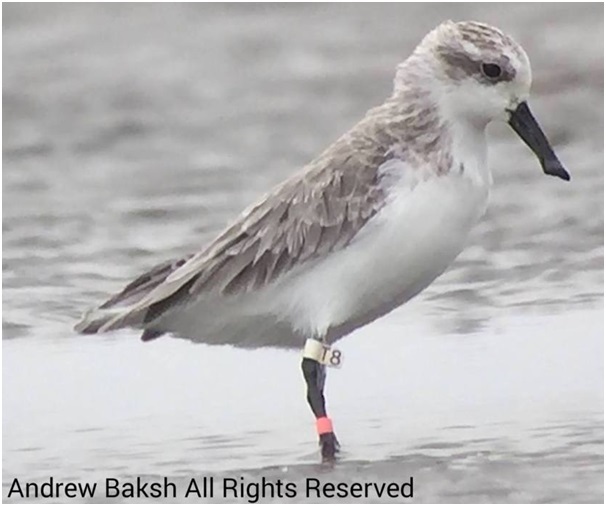 Things got a little bit confusing after this point, given that the birds are often found in large mixed flocks of other small waders and need to be viewed at distance, what appears to be easily visible in a photograph, can be very difficult to make out in the field. Soon after white T8 had been observed, the field team reported another sighting and although they couldn’t be 100% certain, they thought the colour ring might be on the opposing leg. Fortunately persistence paid off and field team member Andrew Baksh, was happily able to report the sighting of a bird with a pink colour ring on its left leg and no coloured flag with a photograph for confirmation. 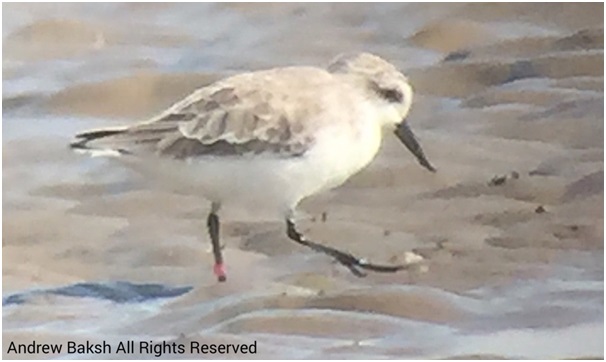 Pink left, another 2014 bird, was really welcome news for the whole headstarting team, shortly after the flag had been fitted, the bird injured its leg and the flag had to be removed. The bird required quite a bit of treatment after that, so to see it alive and fully recovered made for a lot of happy people in both the UK and Russia. 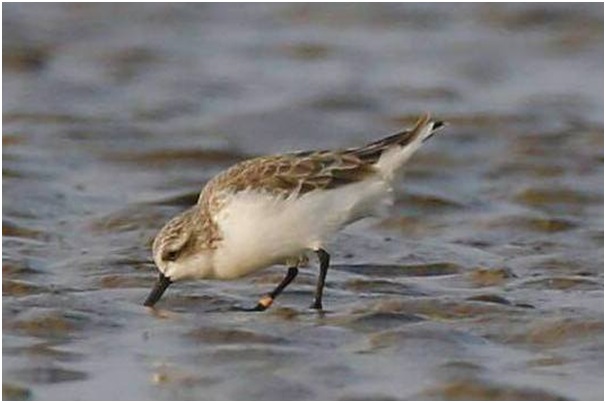 The final confirmed observation at the stop area came from Dongtai on 13 October, this time the bird in question was another 2014 bird; white X8. The fact that the colour ring also appeared to be pink again caused some problems with the initial identification. Given that when it had been fitted to the bird as a chick it was red! Fortunately the observer also took some very clear photographs of the engraved flag and we were able to identify the individual. We sometimes get asked why we put on a single colour ring, when the birds already have individually engraved flags fitted. The reason for the colour ring is that when the chicks are young and initially post release, rings are much easier to remotely monitor the birds with, especially when they are running around the vegetation of the marsh in Meinypil’gyno.

The birds are now starting to leave the Chinese and South Korean stop over sights and as of 17 October we have started to receive reports of unmarked adult spoon-billed sandpipers being observed further down the flyway in Thailand. So it just leaves me to thank all of the dedicated observers that have put so many hours in the field and wish luck to those further down the flyway and also to the birds as they carry on with their migration.