News from the field: Dry conditions, a bear and the first photos

As reported in the last blog, conditions this year are unusually warm and dry. While these conditions have been good for breeding habitat in some low-level areas, conditions are too dry in many of the key areas used by breeding Spoon-billed Sandpipers in recent years at Meinypil’gyno. This may not be a big problem for the birds – they are hopefully finding suitable areas elsewhere – but it’s causing problems for the team. Birds are proving more difficult to find and there may be fewer eggs available in accessible areas. Roland reports that an area that has been a marsh in previous years looks more like a desert this year! 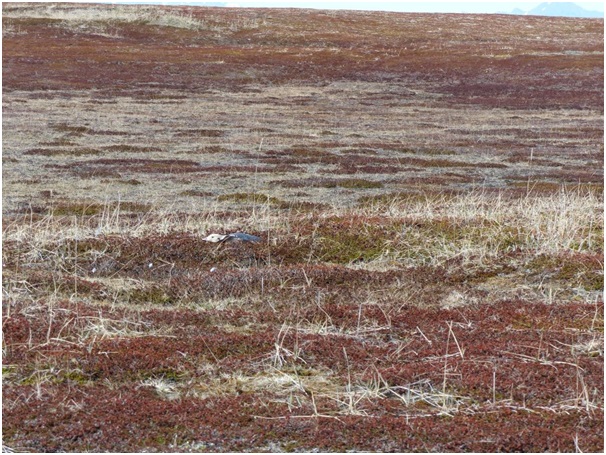 A female Emperor Goose trying to hide on her nest in a very dry area near Meinypil’gyno (usually a wet marsh) on 5 June 2016. Photo by Roland Digby.

As well as birds being more difficult to find because of the areas they are using this year, their behaviour isn’t helping either. It looks like the warmer weather and greater availability of invertebrates is allowing the birds to feed more rapidly and spend large portions of the day resting. They have been quieter than usual with very few song flight displays and only very infrequent ground calls during the day. The team has changed their monitoring strategy as a result, checking territories very early in the morning, with some positive results.

In the main Meinypil’gyno breeding area (which the team call the ‘study area’), seven pairs and two unpaired males have been found with only two headstarted birds among them – White MA and White AA – both of which were headstarted in 2013 and were also present last year. White MA’s 2015 mate, Light green 25, has not yet been seen and neither has the Monument pair, Light green 01 and 02, who have used the area each year since 2010. Another favourite missing so far this year is Light green 8. But there’s still hope! There is still a little more time for birds to arrive and not all birds are found straight away – last year Light green 8 wasn’t found until early July. On a more positive note, White AA, who returned last year but didn’t attract a female, has found a mate and they have established a territory. 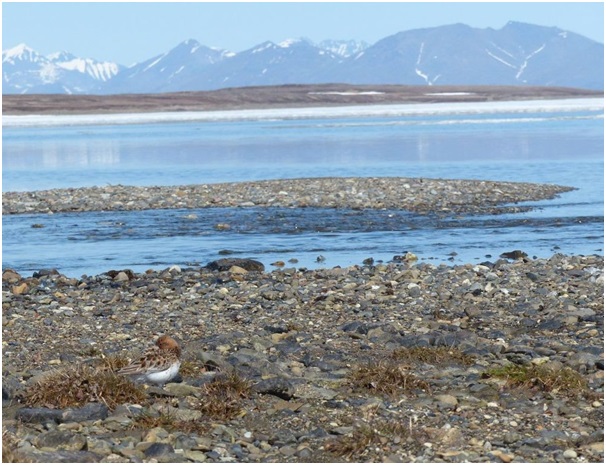 White MA resting at the breeding grounds on 4 June 2016. White MA was headstarted in 2013 and bred successfully last year at Meinypil’gyno with Light green 25. Photo by Egor Loktionov.

In an area to the west of the study area, where the drier conditions have been more favourable for breeding habitat with large areas of marsh exposed, four pairs have been confirmed and two other pairs are suspected (based on the behaviour of the males observed). A single marked bird has been seen in the area: Light green A1, a female marked as a wild-caught chick in 2014. 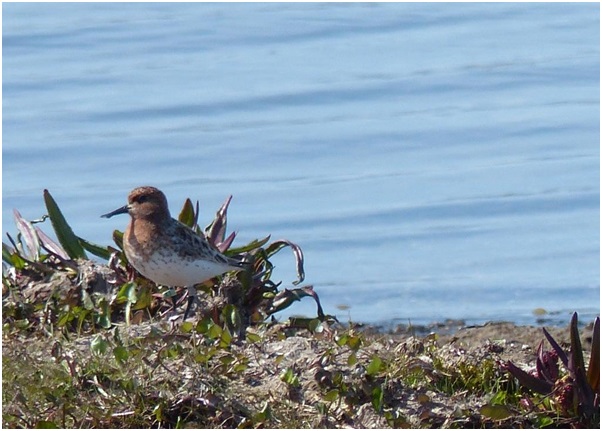 In total, 13 marked birds have been seen at Meinypil’gyno compared with 19 in total last year. All of the 13 were leg-flagged at Meinypil’gyno in 2013, 2014 or 2015: nine as adults, two as wild-caught chicks and two as headstarted chicks.

Between the study area and the western area, Roland believes that there will be enough eggs available for headstarting to achieve our target of releasing around 30 birds. And the warm conditions and plentiful invertebrates should mean the eggs produced are large and of good quality. The team expect to start collecting eggs very soon. Roland and Ivan are spending today making sure the incubation set-up is fine-tuned and ready to go as soon as they receive the signal that eggs are ready. Good luck you lot! 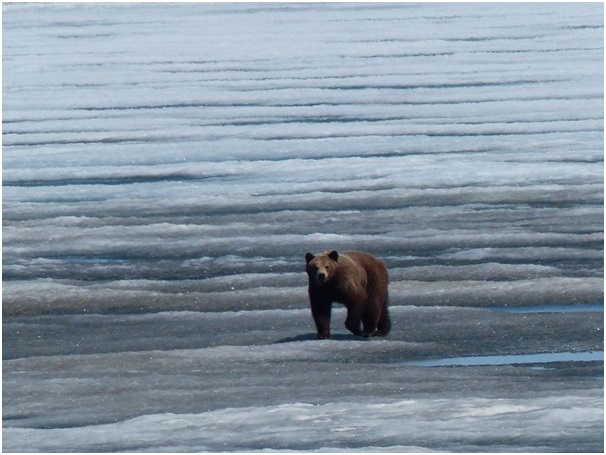 A young bear scavenging on the ice close to the monument area on 5 June 2016. Photo by Roland Digby.