The world’s smallest satellite tag helps one of the world’s rarest species!

Very exciting news from the international research efforts helping the Spoon-billed Sandpiper – one of the world’s most endangered birds. We now have three wild adult ‘spoonies’ fitted with satellite tags – brand new tiny tags that are the smallest of their type in the world. Our knowledge of where and when Spoon-billed Sandpipers move from and to along the east coast of Asia has always been limited. This has hampered our ability to identify and protect key areas for them; from their Arctic Russian breeding areas on the tundra, to their wintering grounds on the mudflats of south-east Asia. But these three amazing new tags are the first step in revealing more secrets of the Spoony.

The tags were fitted to Spoonies on their autumn stopover and moulting area in Jiangsu Province, China, in the south-western corner of the Yellow Sea. The birds were caught and tagged as part of a collaboration between Nanjing Normal University, SBS in China, BTO, RSPB, WWT and Microwave Telemetry Inc. 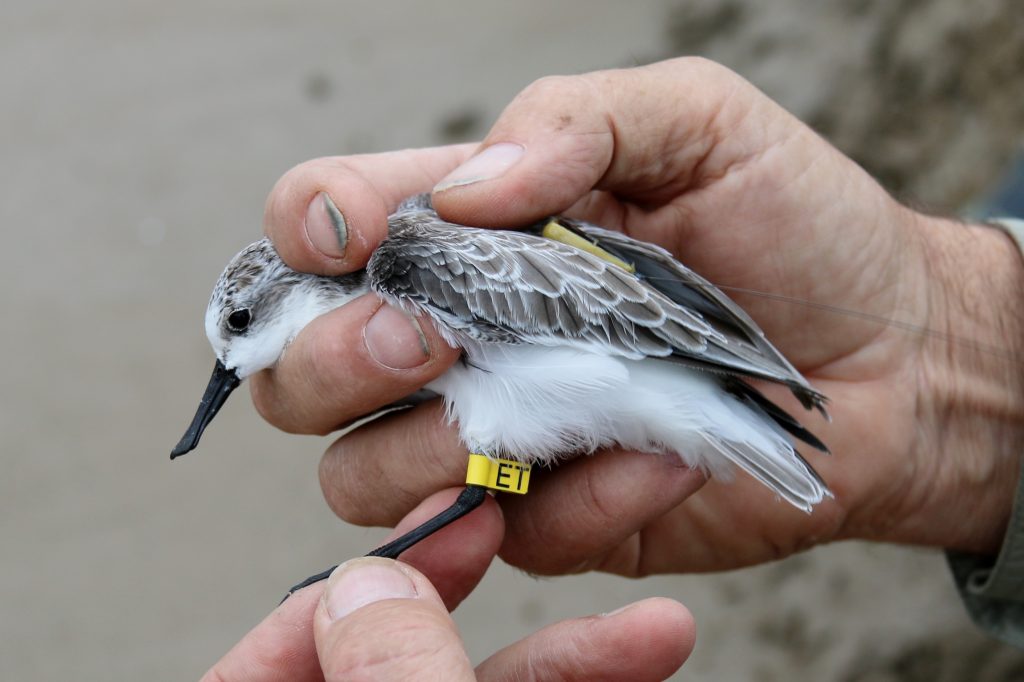 One of the three Spoon-billed Sandpipers fitted with a satellite tag at Tiaozini, October 2016.

In 2015, Microwave Telemetry agreed to provide the first few of the world’s smallest satellite tags to a project where they would make a significant contribution to conservation efforts. The research into Spoon-billed Sandpipers was the chosen project. There then followed an extensive testing process to make sure the tags would work as intended, and be safe for the birds, when fitted to small waders. With less than 250 breeding pairs of Spoonies in the world, these were birds we had to be very, very careful with. Trials with captive dunlin went very well though, and both tags and birds behaved normally for months. Independent experts were consulted and the project to use these tags on Spoonies was approved. Much effort went into securing all necessary permissions and authorisations for getting the tags to China, catching Spoonies and fitting tags to them. We assembled a team of experienced wader catchers from the UK, New Zealand and Hong Kong to work with our colleagues in Jiangsu, and we were ready to go in late September.

We were confident that we could successfully catch Spoon-billed Sandpipers in Jiangsu, the same collaborative team having successfully caught ten there in September 2015. But this year, the weather was against us to start with. The tail end of a typhoon limited what we could do for the first few days – even seeing any waders through the wind and rain was challenging at times!

The birds then kept us on our toes by using different locations to last year; finding a handful of Spoon-billed Sandpipers within flocks of thousands of small waders can be a challenging task. Using a variety of methods, we managed to catch a couple of Spoonies, and eventually caught a bird that was suitable for tagging. We needed to catch adult birds that had completed enough of their annual feather moult, as the tags were to be attached to the back feathers. If we attached the tag to feathers that were old and just about to be moulted (rather than newly grown), the tag would not stay on the bird for very long at all.

First we ringed, and measured the bird and – like all the Spoonies we caught – fitted it with a small engraved plastic leg flag, so that could be seen and identified in the field. We had 30 individually coded flags to choose from so we asked the Nanjing students to choose a code. They chose ET; very fitting for the first Spoony to communicate with a satellite! Tagging went smoothly, and ET was released soon afterwards, to return to its mudflat feeding areas. There was more good news that day as we had located a roosting flock of 3,000 waders but with at least 45 Spoonies in it! (that’s getting on for 10% of the estimated post-breeding world population…). We had two days to go before most of the team had to leave, so it was maximum effort for the next 48 hours. Technical problems with our catching equipment robbed us of 2 attempts to catch Spoonies, but by using mist-nets at night, we managed to fit a second tag at 2am on our last day, and with 6 hours to go before some of us had to drive back to Shanghai airport, we managed to catch a third suitable bird and our last tag was fitted. To get this far we had caught nine Spoonies in total – all of which were fitted with individual colour flags – and 900 other waders – all of which were ringed, and also colour-flagged.

There was just time to go back to our base, pack all our equipment, scrape the mud off all our possessions and have a celebratory dinner with the whole team before we left for the airport, exhausted but elated that we had succeeded.

Some of us are now back in the UK and we are getting regular location fixes from our pioneering Spoonies. All being well, the satellite transmitters should stay attached to the birds for a few months and reveal their movements during this time, but they will eventually drop off of their own accord. We will give regular updates on their progress so that we can all be awed by how this amazing technology is unlocking the mysteries of one of the world’s strangest, and rarest, birds. Stay tuned, folks. 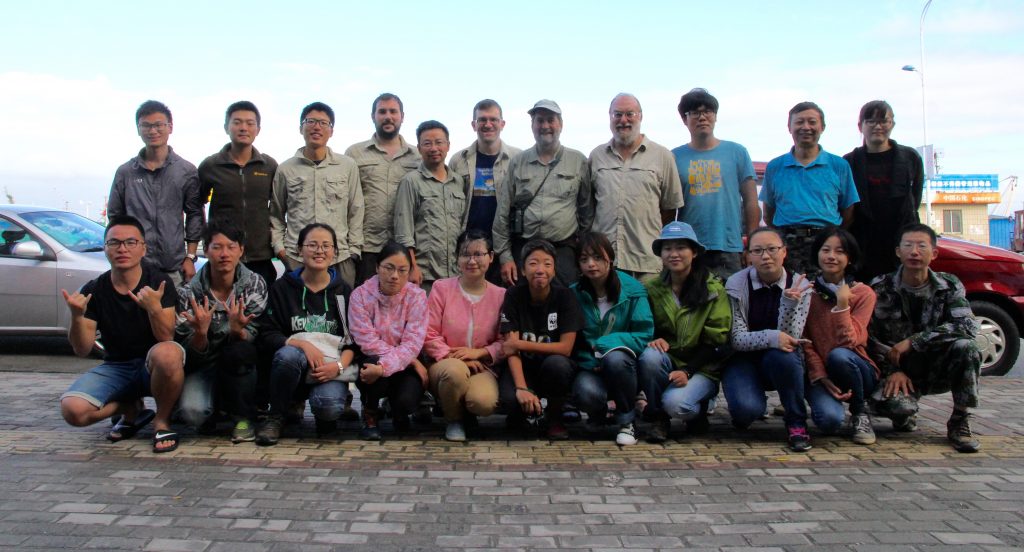 Spoon-billed Sandpiper catching and tagging team at Yangkou on 6 October 2016.

The UK-based project team (BTO, RSPB and WWT) would like to thank our supporters and donors for making this ground-breaking study possible, in particular British Airways Community and Conservation Programme for providing free flights for the UK team members. Special thanks to Rhys Green (RSPB) and Paul Howey (Microwave Telemetry Inc) for expert advice throughout, and to Jon Dew of Five Star Freight Systems, for very timely help negotiating paperwork at Heathrow Airport! Thanks to the other members of the catching team; Ewan Weston (UK), David Melville (New Zealand), Katherine Leung (WWF Hong Kong) and well as to Professor Chang Qing and his team of excellent, hard working students from Nanjing Normal University, and Jing Li and Zhang Jun from SBS in China.