Today, Jonathan Martinez managed to catch-up with one of the satellite tagged spoon-billed sandpipers, HU, near the port town of Xitou in Guangdong province, China. HU has been at this site since the end of October, arriving a few weeks after being tagged on the Jiangsu coast. Jonathan shares his photos and the story of finding her with us here. 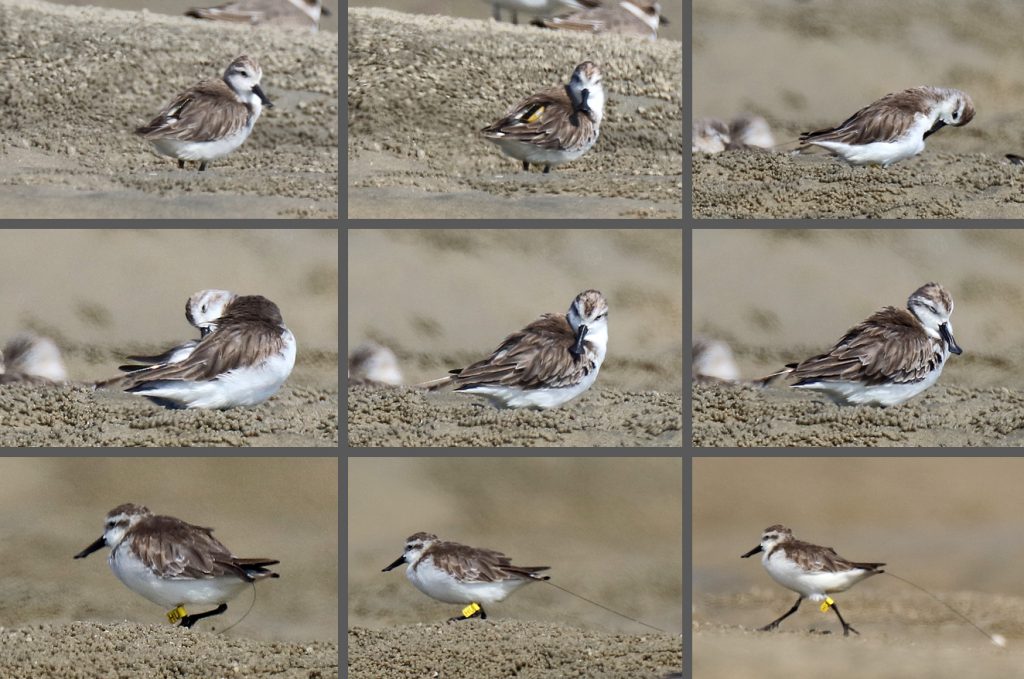 In autumn, the sandbar even at high tide offers a large area for the birds to roost (almost 500 meters long by 200 meters wide) with other large islands of unflooded sandflat near by. This means, at high tide, the birds are dispersed in several groups across the sandbar. What also doesn’t help is that the sandbar is bumpy and the birds (especially the spoonies it seems) like to shelter in the hollows.

My strategy today was to first scan the whole area from the access point on the beach, and then go further to scan the distant groups. I carefully checked all the Kentish Plover in the closest group of birds. Then a scan of more distant birds revealed one that I suspected could be a spoon-billed sandpiper. I wasn’t entirely sure but I followed my first impression and headed off slowly to this group, the difficulties being not to disturb any birds roosting in between… 20 minutes later, I was in front of the group and the suspect bird was a spoonie! Its legs were hidden but fairly quickly, I noticed something on its back… the satellite tag of HU! I couldn’t believe I had found the bird so quickly… it had been so easy, just straight away after a general scan… There were about 1,600 small shorebirds in front of me and half of them hidden behind sand bumps.

My camera was in my backpack, but by the time I had managed to get the camera out, the bird was gone from my scope… Big panic!!! I moved the scope to the right, moved it to the left… nothing… I was fairly sure no bird had left but where did it go… Behind a bump of course!!! I decided to try to get a bit closer to the group where the bird was, and finally as a few birds walked a bit, she re-appeared… I managed to take some photos and watched her for about 30 minutes and then she decided to walk to another group… There was still almost two hours of high tide, so I decided to retreat and leave her. I was hoping I was going to be able to find her again later when she started to forage but this didn’t happen… I just spotted her once briefly as I scanned all the flocks to count the other shorebirds, again the bumps making it very difficult.

After the time she has already spent here, I’m quite confident that she will stay for the rest of the winter. If she loses her satellite tag, we will still be able to identify her by her leg-flag so we’ll know if she’s here in December and later in the winter. But the satellite tag probably won’t be lost soon as she has not yet finished her moult. It is hard to see in the photos, but she still has a rosy tinge on her head which helped me find her amongst the other peeps.

In total I saw three spoon-billed sandpipers on the sandflats at Xitou today. If all three overwinter here, it will be very encouraging. It will mean that the Xitou wintering population has gained a new bird each year since 2014 (there were two wintering there in 2015, a single one in 2014 and none in 2013, 2012 or 2011, but again the bumps make it very easy to overlook them amongst all the other birds)…

The Mayor of the village has asked me for photos of the local birds to decorate his hotel near the sandflats, and he’s let me know that he has put up large signs, of steel and concrete, at different locations along the mangrove and along the road that leads to the sandbar, saying “Protect migrant birds, Illegal hunting is prohibited.” I’m so happy that the birds are being protected… I hope other sites will do the same.

Thank you Jonathan – let’s hope you have many more sightings this winter!