The tagged spoonies are on the move!

Last week we announced that we had fitted the first three satellite tags to wild Spoon-billed Sandpipers, in Jiangsu Province, China in early October. The three birds – ET, HU and CT – are named after the code on the engraved plastic leg flag each bird wears. All three are adult birds, all using the Jiangsu coast as a migration stop-over and moulting site. As many spoonies are finishing their moult by early October, we expected some to move soon after we tagged them, and indeed they have.

HU was first off the blocks, quickly moving south to Hangzhou Bay, where she (we think its a ‘she’ based on body size) stayed for at least a week. Hangzhou Bay is the first major estuary you come to travelling south from Shanghai, and has the world’s largest tidal bore (following satellite tagged birds is great for expanding your geography knowledge!). After a few days radio silence, she (we’re going to go with that, apologies if you’re a male, HU) was on the move again, apparently heading east out to sea before turning south west, and eventually stopping again near the port town of Xitou, Guangdong province, about 250km west-south-west of Hong Kong. She appears to be in another estuarine area where she’s been for about a week now.

ET, the first bird to be tagged, stayed at Tiaozini for a little while longer then headed straight south, overland, to the Minjiang Estuary in Fujian Province. Minjiang is an area that has provided previous sightings of spoonies, so it seems like ET had read the guidebook. She (again, we think she’s a she) stayed here for at least 5 days – during which time a local photographer managed to get a fantastic shot of her on 29 October, alive and well and looking pretty fat – perfect condition before a long migration flight. On cue she moved south-west, and spent from the 31 October to 3 November in western Fujian province in an area of saltpans 350 km north-east of Hong Kong. Last night, she started moving again, and as I write, it looks like she is still flying south-west, with the weather maps showing a good tailwind behind her, somewhere near the island of Hainan. Where will she end up, we wonder? Will she go overland, across Vietnam, Laos and Thailand and head for one of the major known spoony wintering areas in Myanmar or Bangladesh? Or will she surprise us and end up somewhere we know little about? We’ll update again soon. 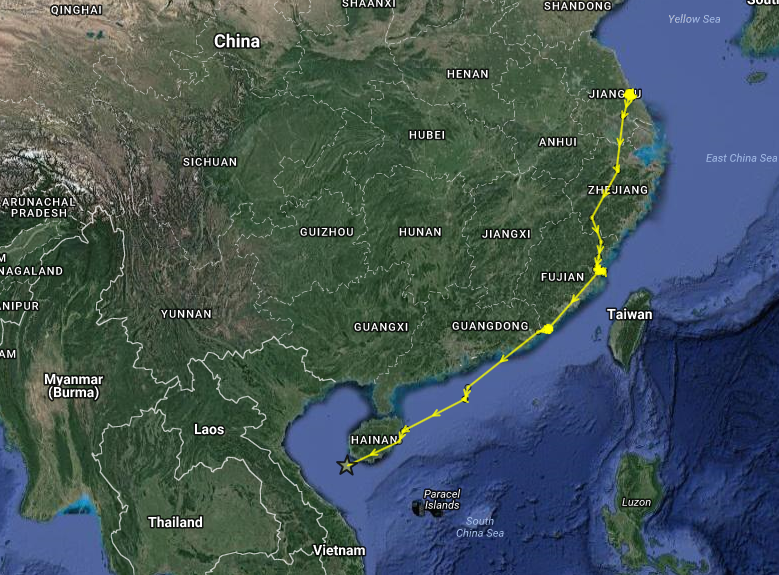 Our last bird to be tagged, CT is still at Tiaozini, close to where he (again, a slight guess, but we think he is a he) was tagged. Now, no comments about lazy males please. What we do know is that when we tagged CT, he was still finishing off his annual moult of his flight feathers. We would expect spoonies, and indeed most waders, to complete their moult before migrating onwards, so a delay is not unexpected. Indeed our colleagues at ‘SBS in China’ have visited Tiaozini in the last days and found a number of spoonies still there, and CT himself was photographed there in mid October, feeding voraciously. So we await CT making his move and following his female compatriots.

We will be able to make the locations of our 3 intrepid spoonies available on a map on this website very soon. I know that for me at least, checking on their locations is becoming a daily obsession. The technology involved with these satellite tags does not fail to amaze me. Who knows what new insights these birds will reveal, all of which will hopefully help steer global conservation efforts for this Critically Endangered bird.

The Spoon-billed Sandpiper satellite tagging project is a collaboration between BTO, RSPB, WWT, Nanjing Normal University, SBS in China and Microwave Telemetry Inc. It is part of the wider international efforts to study and save this amazing and unique bird.

To help us tag more spoon-billed sandpipers, visit the Donate page of this website or contribute to the appeal currently underway by BirdLife International.