News from the Field: A Full Incubator

Spirits are high now the incubator is full and the River mouth is finally open! 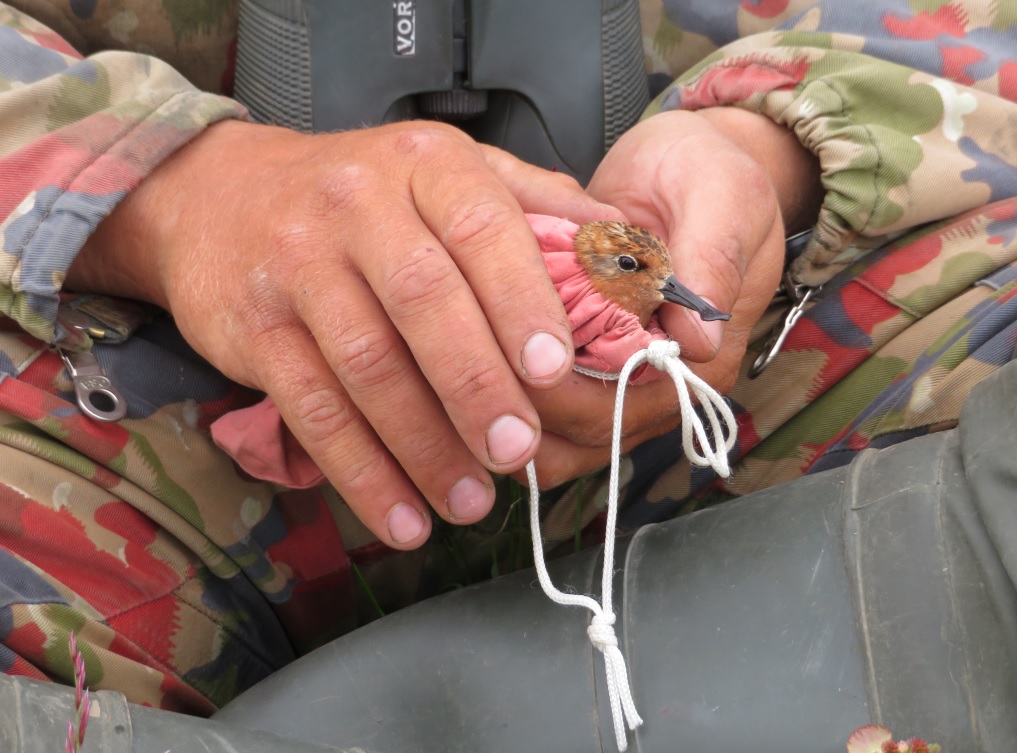 This year a grand total of 35 eggs have been collected by Nickolay and Ivan, 31 before the re-lay cut-off date (21st June) allowing females the chance to lay a second clutch and males to rear their own brood. Most were collected within the core survey area meaning a shorter journey to the village via quad bike, but 2 trips had to be made further afield travelling by quad and boat. Naturally there are some eggs that are infertile and some that are fertile that died early on. This can be due to a number of factors mostly out of our control, for example, genetic abnormalities or ageing parent birds causing weak embryos. These eggs have been removed and will be sent away for further analysis. 28 eggs remain in the incubators. 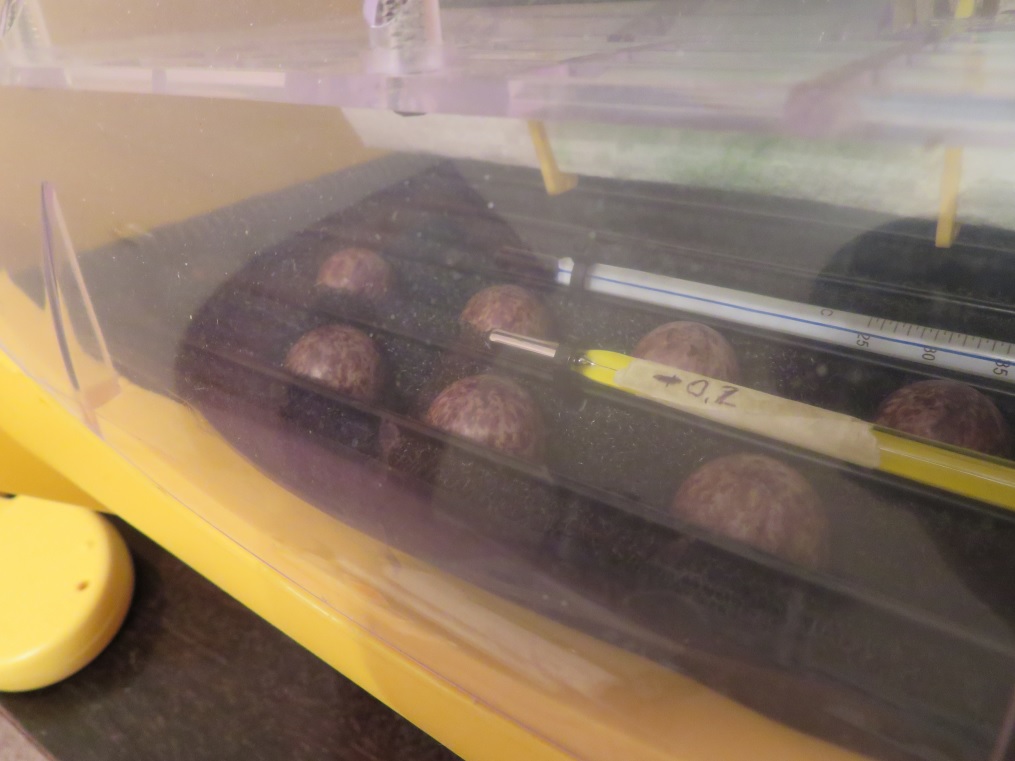 Eggs in the incubator!

Now water levels are receding construction of the release pen has begun. The rearing house is also being prepared for the arrival of the chicks with brooders and heat lamps ready for the indoor rearing stage. In the last few days we’ve seen an influx of mosquitoes and aquatic invertebrates, collections have already begun but we’re still hopeful for even bigger swarms in the coming days. 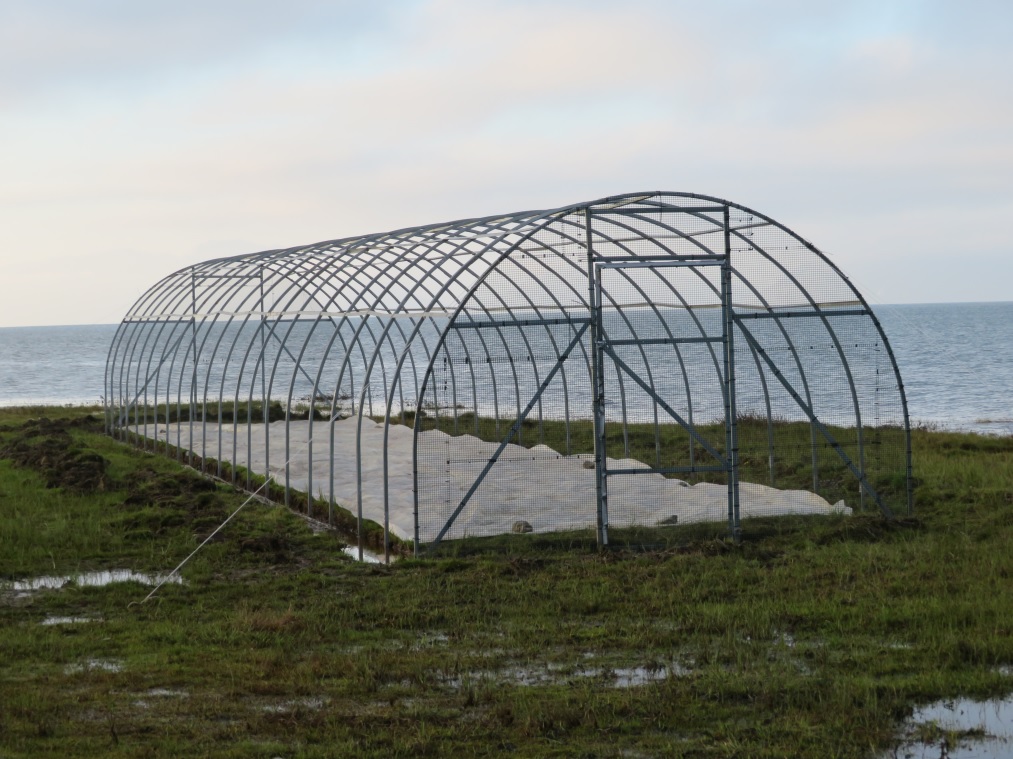 Many hours work put in by Nickolay and Ivan erecting the release pen, still many hours to go!

A number of spoonies have been newly flagged this year, meaning all of the known spoonies in the core area this year are now marked. Flagging enables re-sighting of birds which allows us to estimate populations, track feeding sites and record pairings and parentage. In the last few days Ewan Weston has also arrived in Meino ready to deploy 3 satellite tags which will give us even more insight to the secretive lives of the Spoon-billed Sandpiper. By strategically choosing which birds to tag (those that haven’t been sighted in the known areas) we hope that they will reveal new migration stop-overs and moulting points. 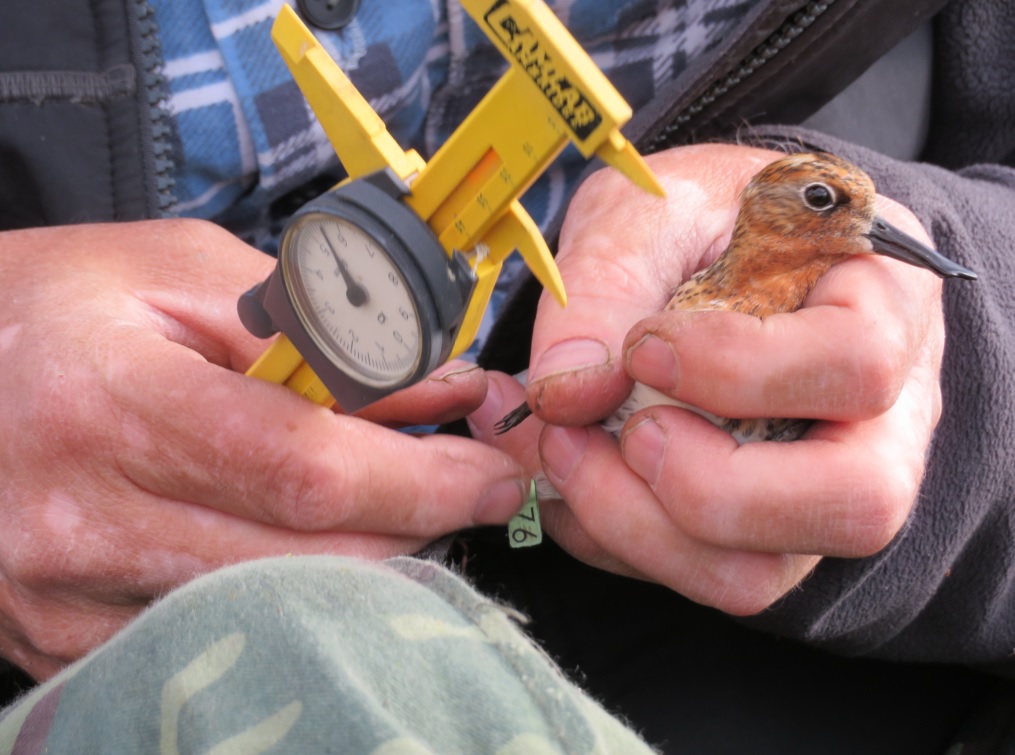 While the rearing team sit tight with the incubators the field team continue their surveys in the core and surrounding areas. As well as collecting data on Spoonies they monitor and collect data from many other bird species. Red Knot adults are also fitted with flags and in previous years have been fitted with data loggers to track incubation length. The nests are monitored too, close attention is paid around hatching time as the chicks are also ringed and flagged in hope of future sightings. 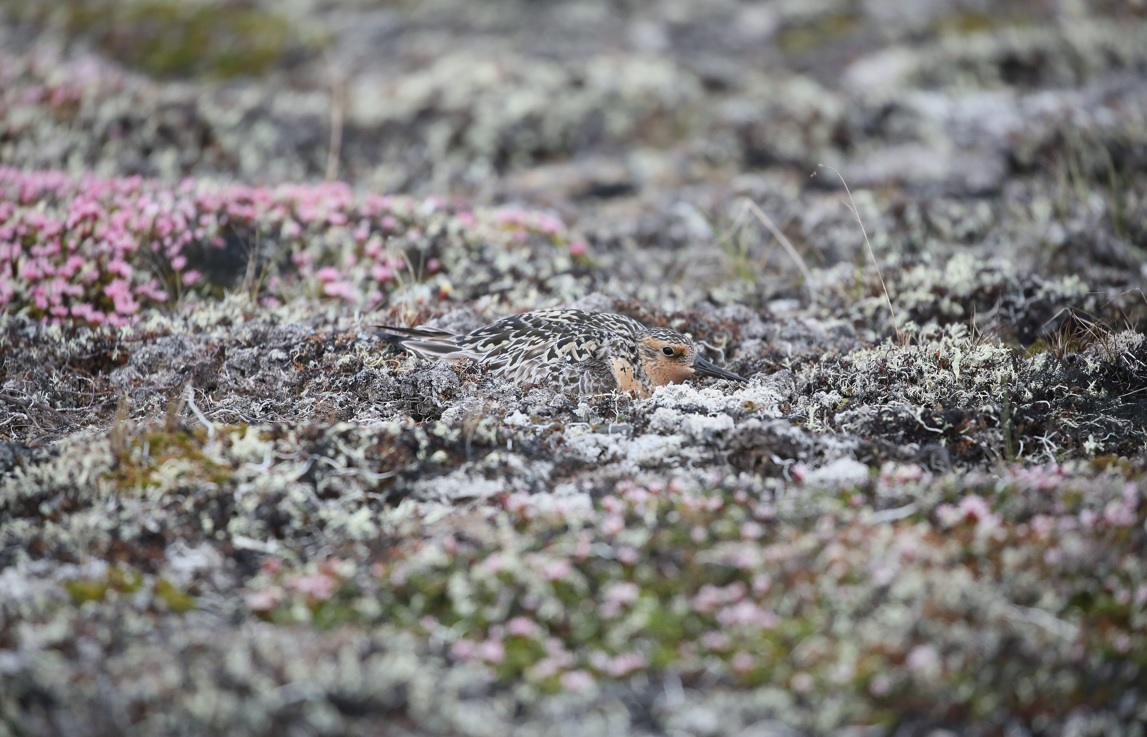 Adult Red Knot keeping a low profile as the nest is approached. Photo by James Phillips. 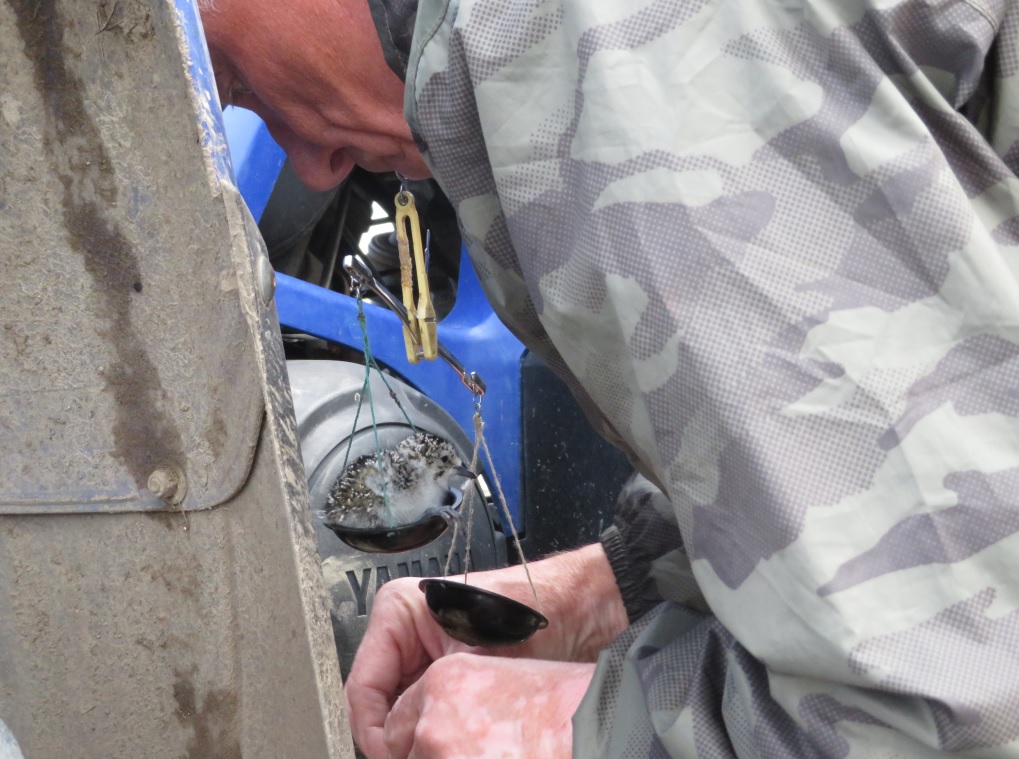 Ever wondered how you weigh hatchlings in the field? Photo by Jodie Clements.

Tern numbers are also estimated and nests counted. There is a large colony and sub colony totalling around 100 individuals comprising of mostly Arctic and Common Tern. A handful of Aleutian Tern have also been seen and heard within the flock with at least one pair on eggs.

It’s not just birds we’ve been seeing in Meina! We have been lucky enough to see bears almost every day. 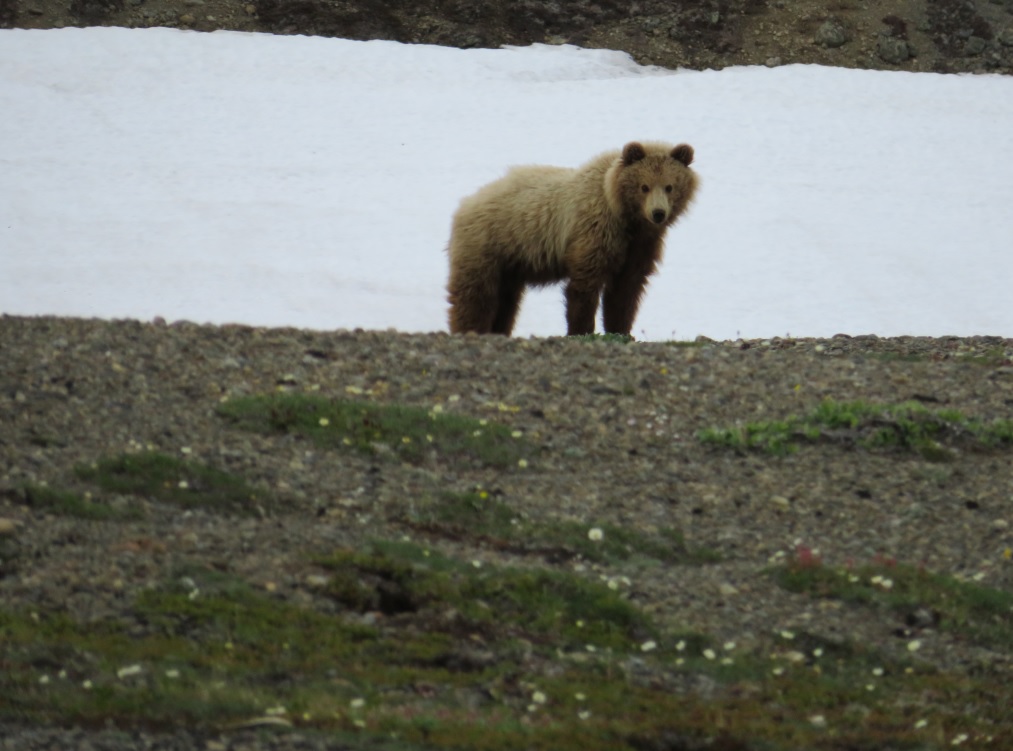 On our travels to the outer most spit we have been treated to Beluga in groups of 50+, Grey Whale so close you can smell their breath and Larger Seal in excess of 400 individuals hauled out at the river mouth. Red Fox and Wolverine have also been spotted close to the mountains. Ground squirrel are also present in high numbers. 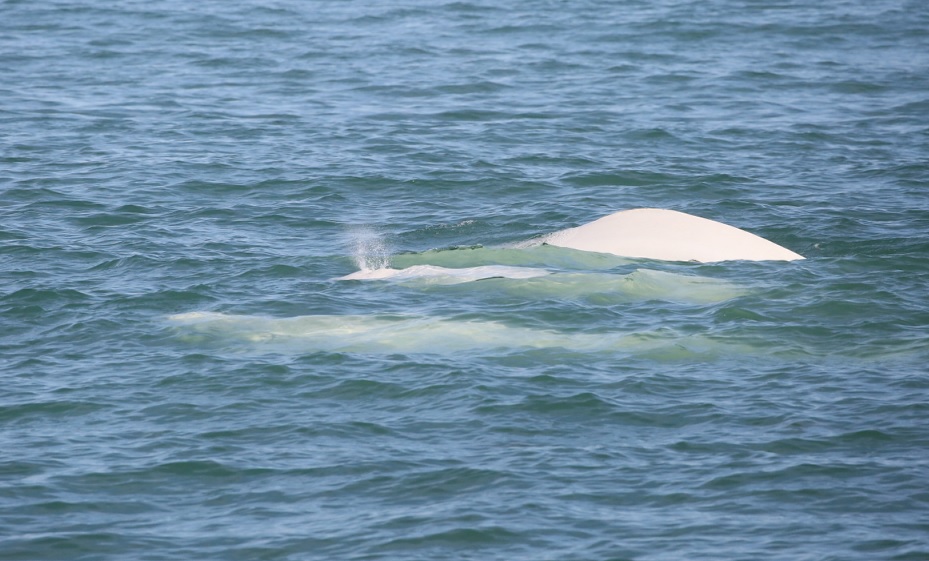