On Wednesday 5th September a team from the UK arrived in Shanghai to join colleagues from New Zealand, Hong Kong and China to continue the latest survey efforts of Spoon-billed Sandpipers in Jiangsu Province. Three aims of the expedition are keeping the team busy for the next two weeks which involve 1) scanning flocks of waders for spoonies to see what proportion of the birds are colour-marked, this will help us to improve our global estimate of the Spoon-billed Sandpiper population 2) whilst scanning the flocks the team are attempting to identify as many individual spoonies by their colour flags, this providing valuable information on movements, survival and giving fascinating insights into the lives of these special birds and 3) attempting to catch a sample of spoonies and other shorebirds to increase the number of colour-marked individuals in the population.

A large amount of time has been spent trying to catch spoonies and other shorebirds using a mixture of capture methods from mist netting to cannon netting. The team have, at times been working on very little sleep, through the night and often welcoming sunrise having just released the last birds from the catches. So far 1,751 shorebirds of 31 species have been captured by the team, of which 15 are spoonies! Several Nordmann’s Greenshank and Far Eastern Curlew have also been captured and colour-marked, these endangered species sharing the same important flyway as the Spoon-billed Sandpiper. 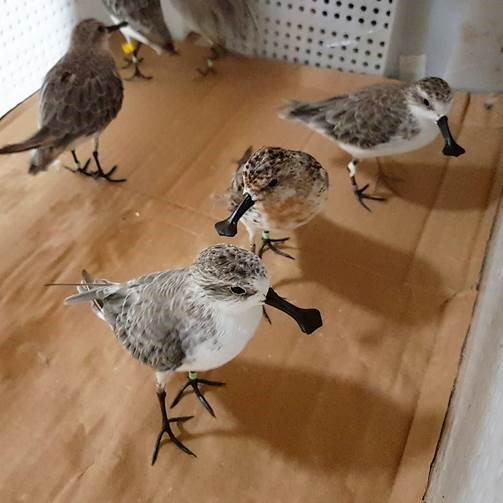 In other news, during the scan surveys the team were delighted to read the flag of ‘white 4H’ a spoonie that was given a helping hand through the headstarting programme earlier this year. Along with seeing 4H, the re-sightings efforts have also identified a number of headstarted birds from previous years, including white 3K in a catch of 6 spoonies!

With several more days of the trip left, the team together with Professor Chang and his team of students from Nanjing Normal University will attempt a few more catches and will be spending more time carrying out scan surveys of spoonies.