It wasn’t long after the Spoonies undertook their ‘migration’ to the breeding aviaries before we saw active breeding behaviours!

Similarly to the wild Spoon-billed Sandpipers in Meinypil’gyno, the captive birds wasted no time in getting down to business. Some of the Spoonies, both males and females, have been singing already. Now much of the flock are singing, displaying, establishing territories and courting their partners. 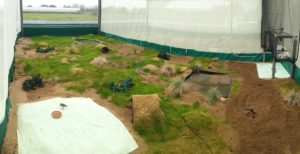 We have seen some particularly good signs from male ‘Pink Dark Green’ and his female ‘Pink Red Right’. These are the birds that laid fertile eggs last year. Fingers and feathers crossed for them this year!

The other pair that laid last year, male ‘Pink Red Left’ and female ‘Pink Light Green’, have also settled well and have been observed singing and displaying together. The male can often be seen corralling the female with his wings, or following her closely, head held high and singing vigorously.

Above, Male Pink Red Left advancing on his female Pink Light Green. Though not so successful this time! Video by William Costa.

Nest scrape calls have also been heard! We can keep a close eye on them through CCTV cameras placed in the aviaries to see where the males are scraping without disturbing them. Once located, we can position small cameras close by to monitor ongoing activity. 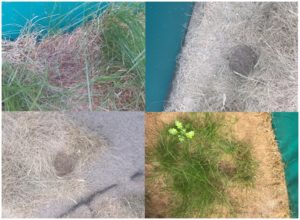 Above are some examples of scrapes we have seen in the Spoonie facility over the years. Once a male has made a scrape he will summon the female to inspect it. If she is pleased with his efforts and location they will then together tend delicately to the nest, pulling in grass around it and placing small treasures within it, like tiny pebbles. Below you can see female Pink Red Right demonstrating this behaviour.

We hope to have some egg-citing news for you in our next instalment… so stay tuned!