Its that time of year again…

The Team are geared up for what looks to be a promising season with the captive Spoon-billed Sandpipers here at WWT Slimbridge. Building on our knowledge and experience with every year, we have entered spring with an open mind and some new ideas. Providing the birds with all they require for a successful breeding season. 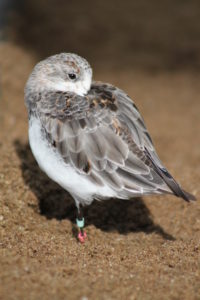 Relaxing while Team Spoonie gets down to business! Photo by Jodie Clements.

Spring conditions in the United Kingdom are much different to those the wild Spoonies encounter in the breeding grounds of far-eastern Russia. Weather and day length are the two main challenges we face. In the tundra of Meinypil’gyno the Spoonies encounter temperatures often less than 10 degrees Celsius with almost 24 hours day light when they arrive; a stark contrast to the recording breaking heat wave the UK faced in 2018. To counter these factors we ‘time-shifted’ the Spoonies, artificially bringing the breeding season forward by 6 weeks by altering day length in hope the birds would breed earlier in the cooler months of the year. This proved to be a success! 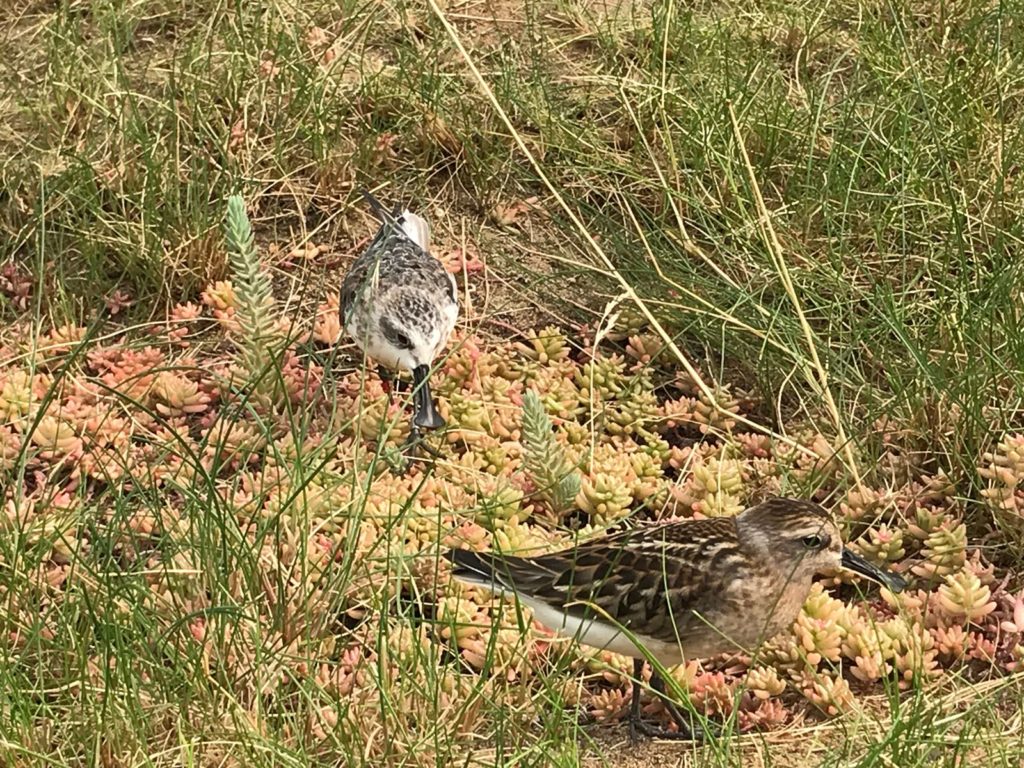 This year to help cool the aviaries we have installed a misting system to the Spoon-billed Sandpiper aviaries, designed by Rosie Drew, one of our Conservation Breeding Aviculturalists.

The misting system installed over the winter months is an adapted greenhouse cooling system. Due to the low water pressure at the facility during the day, an IBC container is filled overnight and cooled to around 4⁰C. The next morning a pressurised pump delivers the cool water via low flow fogging nozzles running through a pipe at the apex of the aviaries. With the average droplet size only being around 70 microns, the idea is that when hot enough most of the water expelled will evaporate before ever hitting the ground. Water absorbs a relatively large amount of heat in order to evaporate which significantly lowers the temperature of dry air. This allows the cooled air to sink to the ground where the Spoonies reside and the warm air to rise. Any fine mist that does reach the ground is well appreciated by the Spoonies who stand under it to have a good shower and preen! 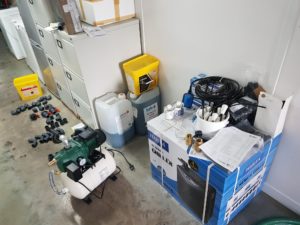 Just a few of the hundreds of the components for the misting system.

We have also installed a trial underfloor cooling system in two of the breeding aviaries. Rosie tells us more…

“The underfloor cooling system set-up works similarly to underfloor heating in a house, except that instead of using hot water we are using cold. This idea came after discussions with Jay Redbond, WWT Slimbridge’s Living Collections Supervisor of Amphibians, who uses this setup in some of his amphibian enclosures on site. Pumps push water through a cooler then through pipes laid under the sand in the aviaries creating small patches of cool ground for the birds to stand on. Combined with the misting system we are tackling the heat issue from both above and below ground! It has been a challenge finding a chilling unit that will work efficiently in hot temperatures so as summer hits and temperatures increase we hope that they will rise to the challenge.” 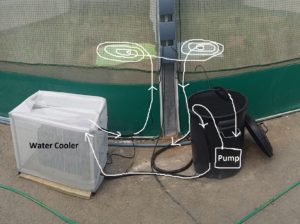 Early tests of these systems looks promising, reducing the ambient temperature by up to 6 degrees in an already cool environment. Fingers crossed on those hot sunny days the systems have an even greater effect.

Annual preparations include gardening of the aviaries – trimming the grass, adding new turf, shrubs and grasses, creating shallow pools and undulating terrain – ensuring the environment is suitable for the males to make their scrapes in. And as the tunnels/mounds were so well used as singing platforms last year, we’ve made sure there are multiple in each aviary. 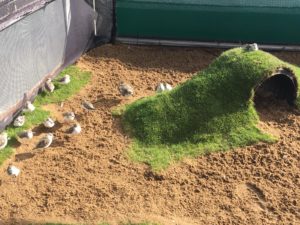 The flock enjoying some early spring sunshine. Note the King of the Castle on his newly installed tunnel! Photo by Harriet Clark.

Stay tuned for our next update!