Slimbridge Spoonies: So how do the birds prepare for the breeding season?

Now we’ve finished preparing the facility for the long awaited breeding season, we can keep a close eye on the birds for signs of breeding activity… 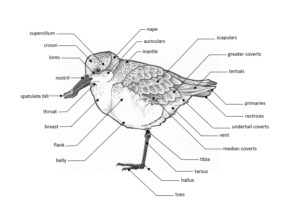 The first clear indications that the birds are coming into breeding condition is the dropping of their winter feathers. You typically start to notice gaps in their plumage on the shoulders, meaning this is also the first place you see growth of breeding plumage. These feathers are called the scapulars. As you can see from the picture above different groups of feathers have different names. This helps us monitor and record different stages of the moult. 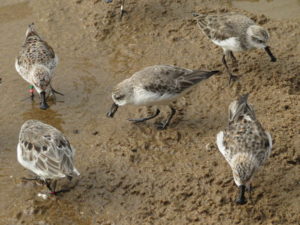 The Spoonies moult at different rates. Most taking around eight weeks to come into breeding plumage.

We record changes in plumage as a code, from 1 to 7, depending what percentage of breeding plumage the individual has acquired. This method of recording was devised by Nigel Clark, one of our advisors for the captive Spoon-billed Sandpiper population. His definitions for wild adults are as follows. 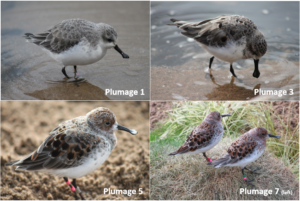 Examples of plumage codes within the captive flock.

Plumage 1 – Adult winter plumage shows an even grey back contrasting with the white breast. The head also appears very white in comparison to all other waders, apart from Sanderling.
Plumage 3 – 25% summer plumage when new breeding plumage feathers are being grown. The feathers on the back look uneven as they do not all grow at the same time.
Plumage 5 – 75% summer plumage. Not all the back feathers have grown but the head and breast feathers are still actively growing.
Plumage 7 – Adult summer plumage. This is easily distinguished by the chestnut/red head and throat. Upper breast is spotted and the back has feathers with black centres bordered by chestnut edges. Sometimes a few winter plumage back feathers are retained. The red colour rapidly fades in sunlight so they appear much paler by the time they have finished breeding. 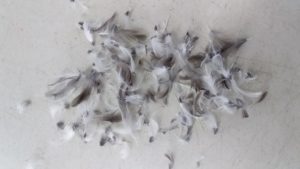 Moult can be quite rapid. These feathers were collected in one morning!

We also notice many changes in their behaviour. As hormones build so does tension within the flock. We start to see a clearer hierarchy. The bigger females are usually the more dominant but at this time of year the males step up their game. They become more protective of territory and food, posturing with ‘churring’ calls, letting others know they are ready to defend. If one over steps the mark they are chased away wings spread and with battle cries (of the Spoonie variety!), often singing afterwards as a sign of victory. If two Spoonies are evenly matched short tussles can occur. They will try to jump on one another, tugging feathers with their bills until one gives up and runs away. 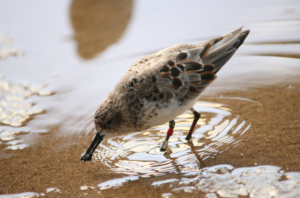 Spoonie ‘Red Right’ demonstrating a defensive posture, churring as he does so.

The quality and duration of the Spoonie’s songs will increase as days go by. The males sing more regularly, but the females can often be heard singing in response.

These factors, with knowledge of past pairings and the team’s experience, are used to carefully consider who will be paired together each season. Stay tuned to find out the Spoonie couplings and how their ‘migration’ to the breeding aviaries goes!