Spoony and friends – the breeding waders of Meina

While searching for spoonies on the tundra around Meina, we often bump into other waders rushing through their short breeding season. Some of these share much of their year with our spoony friends. Red-necked, Long-toed and Temminck’s Stints all use much of the same flyway, down the east Asian coast to warmer climes.

The most common wader by far around Meina is Red-necked Phalarope. Most small pools or lakes seems to have at least one pair of these busy little birds – noisy and often quite tame. The females are much brighter while the duller males incubate the clutch and look after the chicks. These Red-necked Phalaropes spend their winters far out to sea in the Pacific – truly pelagic birds. Knots, both Red and Great, are rare breeders around here. A small breeding population of Red Knot close to Meina, probably the most southerly nesting Red Knot in the world, is being studied by Pavel Tomkovitch (BirdsRussia), Russia’s most experienced arctic and wader ornithologist. Pavel has spent more than 40 summers studying birds in arctic Russia. His knowledge and skill in finding cryptic waders, and their nests, is very impressive. 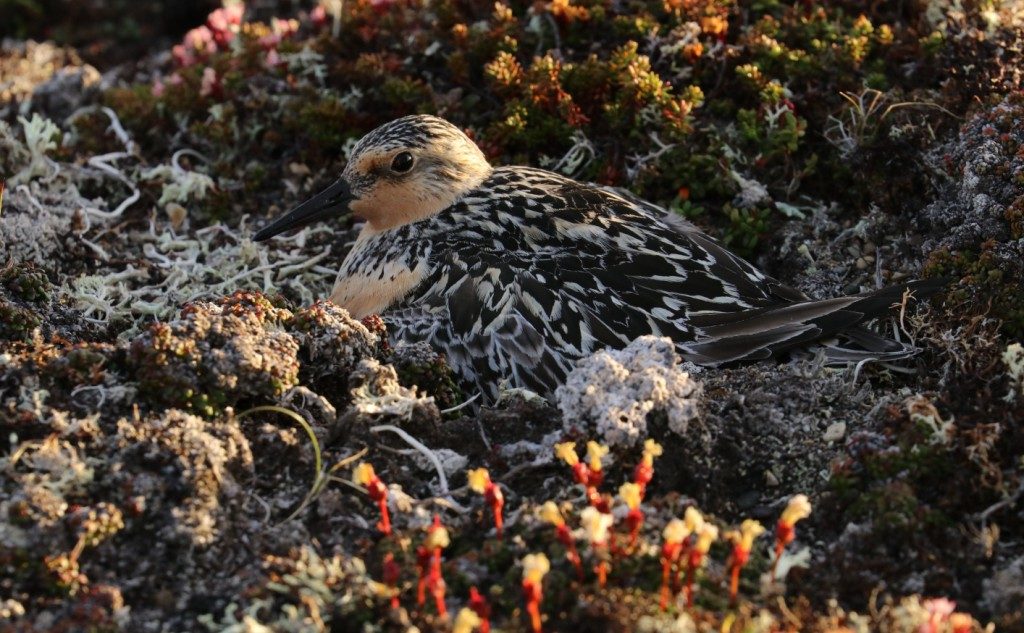 A male Red Knot sitting on its nest does a great job of pretending to be a bit of tundra (Photo by Guy Anderson/RSPB).

Red Knot do an amazingly good job of pretending to be a bit of lichen-covered tundra while sitting on their nest. Great Knot are even rarer here – while having a hiking day off from looking for spoonies, we find two hanging around the summit of a 700m mountain. We wonder if they might be nesting nearby, or just moving through. The birds give us no clues. Their breeding plumage is equally beautiful and well-camouflaged as their Red cousins – what a privilege to find them. A few pairs of Dunlin trill from marshy areas. Ringed Plovers are along all the shingle spits, some even along the gravel tracks in Meina. A few Lesser Sand Plovers nest on dry lichen-dominated tundra, always moving in the classic run-and-stop-run-and-stop plover way. Pacific Golden Plovers give their swanny-whistle calls from dry stony spots. These are nervous birds and complain insistently if you stray into their territory, alerting all other wildlife in the neighbourhood to your presence. 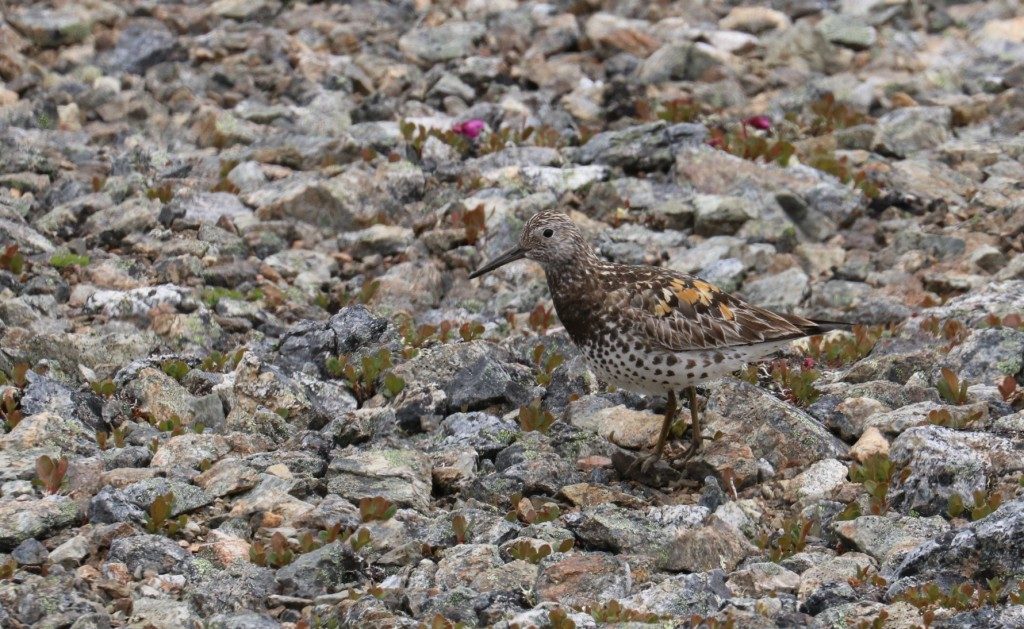 A Great Knot blends into the arctic mountaintop (Photo by Guy Anderson/RSPB).

The wonderfully-named Tattlers, both Grey-tailed and Wandering, remain mythical creatures of mountain streams further north to me. An arrival of over-shooting migrants brings a gorgeous summer-plumaged Spotted Redshank and three Far Eastern Curlews, with their impossibly long bills. How do they not just topple forwards all the time?? These don’t stay long.

The Red-necked Stints are the most troublesome in terms of confusion with spoonies – they are the most closely related species and it shows. Several times we follow rapidly departing small reddish sandpipers thinking we have struck lucky, only to find a bird attached to a bill that is decidedly normal. Indeed it appears that the birds themselves can be confused as we have seen a female spoony hanging around with a Red-necked Stint, looking for all the world like a pair. We guess this isn’t surprising. Spoonies are at such low density, that if a bird can’t find a mate of the same species, it may look for the nearest best alternative. Should such a thing be possible, what would a hybrid look like, we muse? More of a coffee-stirrer than a spoon, maybe. 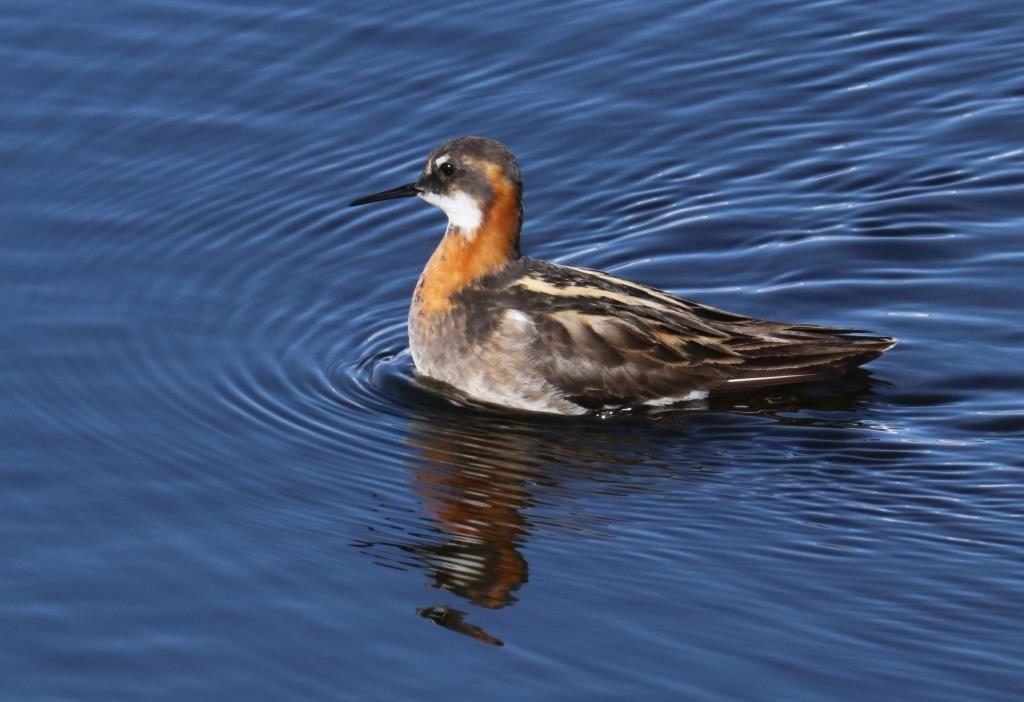 Many of these other waders found around Meina have also shown alarming population declines. Particularly both knots, Far Eastern Curlew and Red-necked Stint. All are now Globally Threatened or Near-threatened. The reliance on the East Asian – Australasian Flyway (EAAF), and particularly the key migration stop-over area of the Yellow Sea, is the common factor here. The EAAF has more populations of globally threatened waterbirds than any other of the world’s major bird migration flyways. Habitat loss and hunting are key problems identified for all these species, spoonies included. Recent conservation successes in reducing hunting pressure in some areas of south-east Asia, and positive intent shown by China in particular to halt habitat destruction, are to be warmly welcomed. But these birds are not out of the metaphorical woods yet. Halting declines and recovering their populations will take time, more evidence as to how to best achieve recovery, and a lot of political will and financial resource. Spoonies are acting as a fantastic flagship species here, as well as being worthy of conservation in their own right. The better understanding we are gaining of the ecology, population biology and migration routes of our strange-beaked little friends is helping a whole community of other waterbirds. I remind myself of this as I spend another day looking for a spoony nest and find nothing but a pair of Red-necked Stints and many, many very friendly mosquitoes.