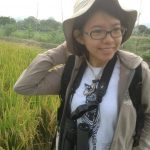 Here’s a video Vivian directed and animated, ‘The Journey of the Spoon-billed Sandpiper,’ to raise awareness of spoon-billed sandpiper conservation amongst children along the flyway.

The project involved 500 children and helpers from 12 areas and 8 countries (Russia, Republic of Korea, Japan, Jiangsu and Fujian in mainland China, Vietnam, Thailand, Myanmar and Bangladesh) along the spoon-billed sandpiper’s migratory route. Children helped colour over 1,200 pictures for the animation one by one. The whole project took about 8 months to produce. At the end of the animation, there are video clips showing children shouting “Save the Spoon-billed Sandpiper!” in their own language.