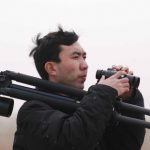 Zhang Lin is a freelance birding guide living in Shanghai, China. When a new bridge opened across the Yangtze River in 2008, Lin and his friends began visiting Dongtai and Rudong in Jiangsu frequently for birdwatching, recording more than 370 species in the area and establishing it as a birdwatching and conservation hotspot.

His conservation efforts focus on the huge intertidal mudflats in the area and the waterbirds using this habitat, especially waders. With others, Lin formed a conservation NGO called ‘Spoon-billed Sandpiper in China’ (SBS in China) and their findings are showing that these sites are one of the most important staging areas for the Critically Endangered spoon-billed sandpiper, a critically important location for re-fueling in the Yellow Sea. With spoon-billed sandpipers as a flagship, SBS in China hopes to also help to save many other species at the brink of extinction.

Slimbridge Spoonies: Bringing you up to speed

Everyone uses Twitter now, but nothing beats the natural tweet of the beautiful but endangered spoon-billed sandpiper. Watch @CWilson_FCDO latest video as she explores the important UK-China work to protect biodiversity #COP15 #COP26 @WWTworldwide @Natures_Voice